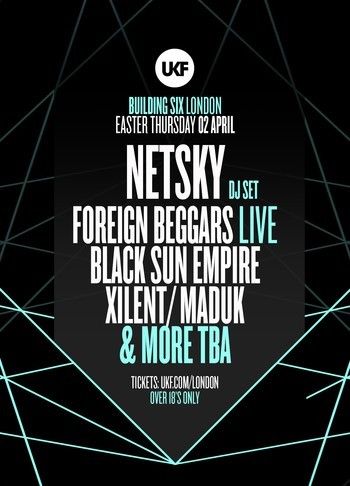 Fresh out of the blocks for 2015 and bass music powerhouse UKF have announced their Easter holiday weekend party plans, taking place on April 2nd at Building Six. Further to their sell out New Years Eve at Brixton Acedemy, UKF return to the South East London venue for the first time since their raucous 5th birthday bash last October, UKF tout a star studded line up for their holiday celebrations, cherry picking from across the bass music spectrum. Featuring underground heroes, global superstars and a chunky, loaded soundsystem, the O2 based venue shall provide the first stop for bass-hungry heads this coming bank holiday.

London based hip hop collective Foreign Beggars are known for their explosive energy and ground breaking beats and bars and will be bringing the same full force show in April. After releasing a wealth of tracks and collaborating with the likes of Noisia, Vato Gonzalez and more, UKF welcome the homegrown upstarts with open arms.

Dutch powerhouse collective and Blackout label heads Black Sun Empire are set to take no prisoners through their immediate and hydraulic style of d’n’b. Also featuring will be Poland’s hottest export Xilent, billed to whip the crowd into a frenzy, with Liquicity Records head Maduk also bringing some smooth flavours from early on.