The Kooks To Headline Community Festival 2019 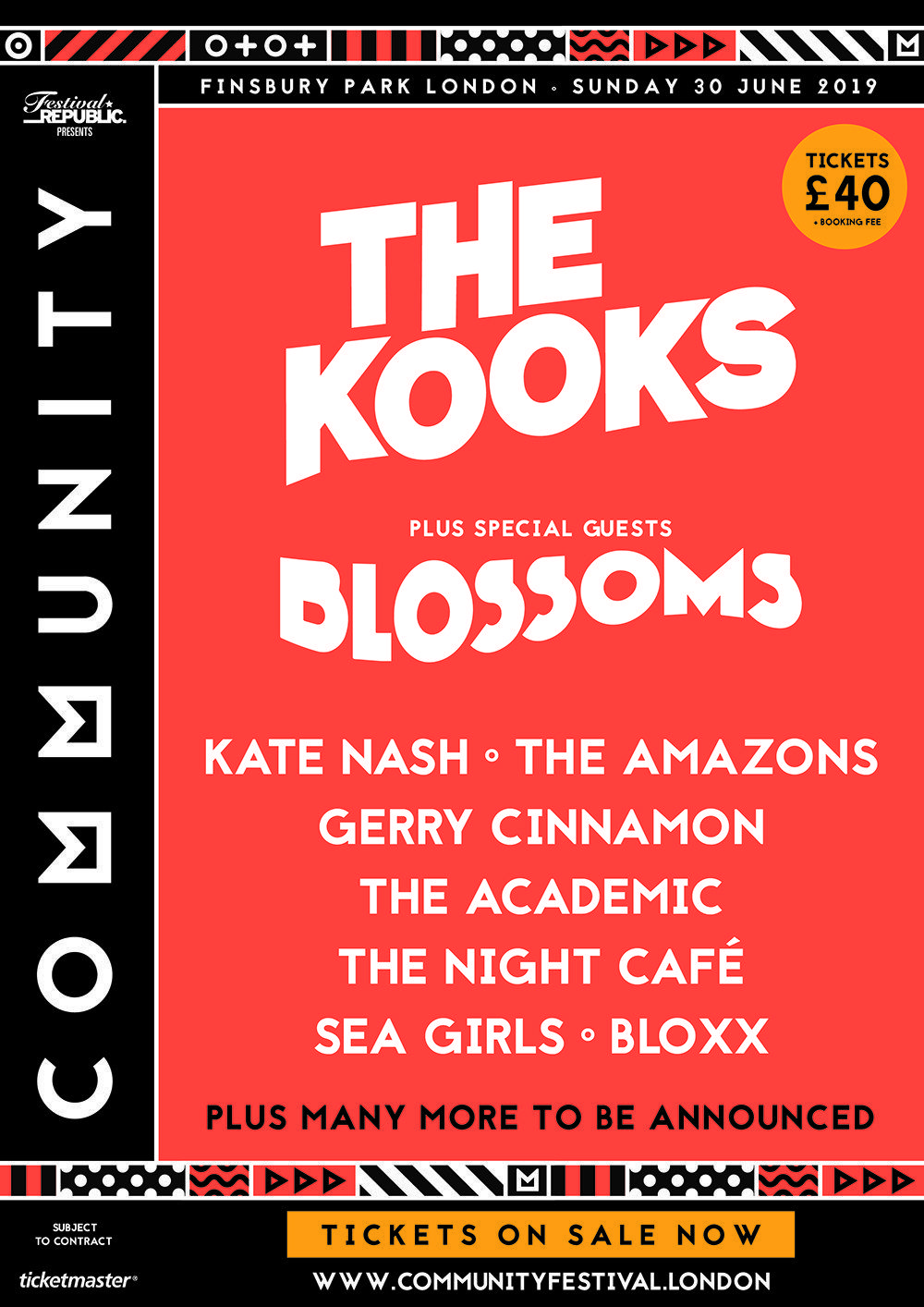 The Kooks To Headline Community Festival 2019

After two hugely successful years, Community Festival returns to Finsbury Park on 30th June 2019 with The Kooks, Blossoms, The Amazons, Kate Nash, Gerry Cinnamon and The Night Café amongst the first acts announced for the defining summer celebration of guitar music. Tickets for Community areon sale now for just £40.

Marking itself out in the calendar for an entire generation of indie fans, Community Festival hosts an unmissable festival line up of the biggest and best loved British guitar bands going – following in the footsteps of legends like Oasis, The Stone Roses and The Sex Pistols to play the iconic park. Headlining its third year are indie royalty The Kooks. With a new wave of young fans, the band have amassed over one billion streams, with their debut album Inside In/Inside Out recently certified quadruple platinum and latest album Let’s Go Sunshine storming into the UK top 10 in September. With huge hits in their arsenal like ‘Naive’, ‘Be Who You Are’, ‘She Moves In Her Own Way’, ‘Always Where I Need To Be’, ‘Junk Of The Heart (Happy)’, ‘Seaside’ and ‘Bad Habit’, a festival sing-along is certainly on the cards as The Kooks play their biggest headline show to date at Community 2019.

Speaking about their Community Festival headline slot, frontman Luke Pritchard of The Kooks said:
"It’ll be 15 years since we first formed as a band next year, and I can’t think of any better way to celebrate than headlining our biggest show to date at Community 2019. It’s been an incredible journey that’s taken us around the world, playing to so many of you and changing our lives completely – we can’t wait to have the biggest party of the summer. See you there x”

Also heading to Finsbury Park next summer are one of the most exciting British bands to emerge this decade, Blossoms. With a catalogue containing an array of belting singles and two critically acclaimed albums to their name so far,Blossoms and Cool Like You, the Stockport pop-rockers are not to be missed. Expect to hear festival anthems ‘Charlemagne’, ‘Honey Sweet’, ‘There’s A Reason Why (I Never Returned Your Calls)’, and many more.

Talking about Community 2019, Blossoms said:
“We love a good, big, London outdoor show …. what a line-up! We had a blast playing with The Kooks in Europe a few years back … but this’ll be even better … mark our words … ”

An unstoppable live prospect, The Amazons will demonstrate why they are beginning to emerge as future rock greats when they step on the Community stage, with cuts from their beloved debut album sure to sound massive as they look to the future.

The Amazons commented:
“We’re delighted to be playing at Community Festival next year. It’s always an experience playing in London, we’ve seen some incredible artists at Finsbury Park in the past and are excited to play there”

The Night Café will continue their trajectory towards becoming future festival headliners with their dazzlingly catchy sounds bound to sound huge with a landmark slot at Community next summer. Also announced are London-basedBloxx, who have made an impressive entrance into the new music world after releasing indie banger after indie banger – capturing hearts with support slots for The Wombats and Pale Waves amongst others. Kate Nash, who is set to take her 2018 album Yesterday Was Forever to captivating new heights when she takes the stage, is set to go down a storm with her unmistakable presence and crowd-pleasing favourites.

Talking about next year’s festival, Bloxx said:
“Community is a festival we've been to as fans for the last 2 years. We're super stoked to be playing it next year along with all the other bands on the line up that you just know is always going to be insanely wild”

A phenomenon that only continues to grow and grow in size, cult Scottish songwriter Gerry Cinnamon looks certain to build on the success of his acclaimed 2017 debut album Erratic Cinematic with his set at Community primed to be one of those moments talked about for years to come. The best place to catch new bands on the rise, Community will once again be packed with exciting new sounds. Fresh from selling out a UK tour, tipped newcomers Sea Girls are a band just getting started and unmistakably will be grabbing 2019 by the horns while Irish chart-toppers The Academic will be bringing indie hooks galore as they make Community their own.

The Academic said:
“Community Festival is one of those festivals that we have wanted to play for ages. We are really really excited to be playing it next summer. It's a quality line up and we can't wait to share the stage with some of our favourite bands. It's gonna be a big one!”

Community Festival is a one-day celebration of the best in new music. Last year’s event was headlined by Two Door Cinema Club and saw 37,500 music fans enjoy one of the hottest music shows of the summer. Catfish and the Bottlemen also headlined the debut sold out show in 2017. With even more memories set to be made in 2019, Community Festival is the go-to destination for a summer celebration of indie.