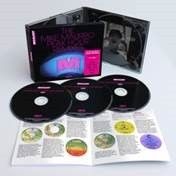 Setting an early marker as the remix collection of 2015 is, ‘The Mike Maurro Peak Hour Remixes’, released 2nd February on Harmless Records. 21 state-of-the-art remixes, all from the original multi-track tapes by a guy steeped in dance music culture and a fierce collector of multiple formats of the recordings, ‘The Mike Maurro Peak Hour Remixes’ features some of the greatest dance music classics of all-time from such artists as Johnny Hammond, Evelyn ‘Champagne’ King, Harold Melvin & The Blue Notes, Candi Staton and Loleletta Holloway.

Welcome to the murky world of digging multi-tracks which, unbelievably, are often accidentally dumped or end up in skips or are simply unclaimed from the studios where the tracks were originally recorded. Finding multi-tracks to remixers is the equivalent of finding a huge rarity for vinyl crate-diggers. And no one digs multi-tracks better than Mike Maurro.

East Coast, U.S.A., 2014 and the remix culture elite squad are alive, well and continuing the spirit and heritage first created by Tom Moulton some 34 years ago, when he created the both the remix and then the 12 single in a totally organic act of nature. This is a very private club where the currency and terms of membership are measured by access to 2” multi-track tapes and, hence, the opportunity to access the full original recording and remix it. Where these multi-tracks came from and how they fell into the possession of the East Coast elite is a whole other set of stories.

Many of the names in the club are familiar – Tom Moulton aka the godfather, John Morales, Danny Krivit, Paul Simpson, Victor Rosado to name a handful – all East Coast veterans through and through. It’s a difficult club to join and outsiders don’t get in. But somewhere around 2008 a new name entered the ring; some guy from Brooklyn called Mike Maurro. First there were 2 state-of-the-art Spinners remixes that got people talking and then the incredible opus that is Ashford & Simpson’s, ‘Tried, Tested and Found True’ and suddenly everybody wanted to know this guy from Brooklyn. These remixes were from the original multi-tracks. What else did he have? Where the hell was he finding these multi-tracks??

After meeting the great Tom Moulton in 2011 and having lessons from the Remix Master himself, Mike started getting better and better….and more daring. He began to discover his own style of remixing and created a signature sound with unconventional methods of mixing. His extra-long drumless intro’s and acappella endings have been widely accepted and praised by artists, dj’s and dancers all over the globe. Over the next several years Mike would remix over 80 tracks without any receiving an official release until now.

As with many Harmless releases, ‘The Mike Maurro Peak Hour Remixes’ was a torturous project to clear for release. It meant explaining to the repertoire owners that, yes, these remixes were from the original multi-tracks and, no, we don’t know where Mike got them! A delicate balancing act at best, especially when some of the multi-tracks are no longer in the repertoire owners vaults.

‘The Mike Maurro Peak Hour Remixes’, puts Mike Maurro firmly in the tradition of the great East Coast remixers and introduces a fresh new sensibility to the art of the classic remix. Brooklyn rocks the best.