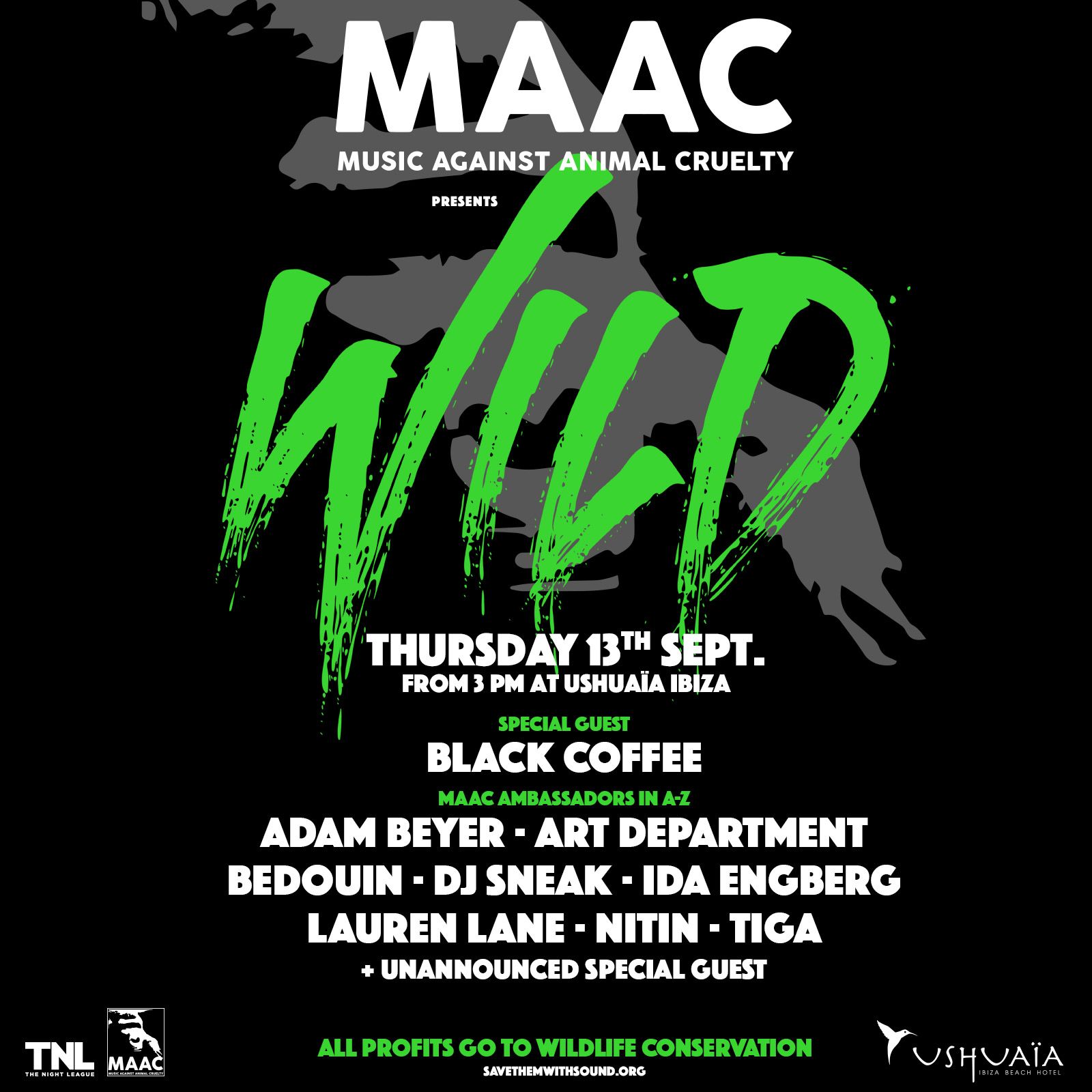 On Thursday, September 13th The Night League in association with Music Against Animal Cruelty (M.A.A.C) present “Wild” a charity fundraising event featuring a heavyweight lineup of some of biggest names in house and techno.Black Coffee will appear as a special guest, alongside multiple other heroes of the underground. The lineup is packed with legends, including M.A.A.C. ambassadors Adam Beyer, Art Department (co-founder of M.A.A.C),Bedouin and DJ Sneak, Ida Engberg, Lauren Lane, Nitin and Tiga. Finalising the line up will be an unannounced special guest making this event a must-attend for all fans of house and techno.

All DJs are contributing their performance for free and all profits from this event will go directly to wildlife conservation projects.

“Outside of the events world, animals are my one true passion. Cruelty against any animal is simply unacceptable so I could not refuse the incredible opportunity to work with the Music Against Animal Cruelty team. Together, we will not only raise funds for their cause, but we'll also increase awareness about some of the truly horrific things affecting defenceless animals every day. While the entertainment industry is about fun and enjoyment, I’m very happy to see the community rally for such a serious and worthwhile cause.”
– Yann Pissenem, Founder & CEO, The Night League

With the support of the music community, Music Against Animal Cruelty (M.A.A.C.) aims to raise much-needed revenue from worldwide music events to directly go towards wildlife conservation in key areas. Using a worldwide collective of united like-minded individuals, DJs, artists and influential voices, M.A.A.C. has created a valued network who will in turn help create a vital source of income for international wildlife conservation projects through global music events.

““This is gonna be a powerful movement when we realize its full potential. We need to be clear that this goes beyond just our community. This isn’t just techno against animal cruelty. This is music against it. This is a global force against treating animals like they have any less right to be here than we do. For now we’re looking to our sector of the industry for support as we build the foundation, but the bigger picture is garnering the support of the music industry at large, the same way the industry has been successful in the past with initiatives like live aid for example’
– Jonny White – Art Department / Co-founder M.A.A.C

With 90% of the world’s Rhinos lost in the last 40 years, 97% of the Tiger population gone since the year 1900, up to 30,000 elephants slaughtered for their ivory each year and the illegal wildlife trade estimated to be worth over $15 Billion USD per annum, we are now facing a global crisis where if we don't act now, species will go extinct. Music Against Animal Cruelty (M.A.A.C.) was set up to tackle this critical situation. A non-profit organisation with one simple directive: to aid wildlife conservation through the medium of music. At the present rate, 20% of the world’s 15 million species could be extinct in the next 30 years. This is an unprecedented rate of extinction, which has not been seen since the disappearance of the dinosaur 65 million years ago.

With the music industry uniting on this global cause as the project gains momentum, ambassadors for the organisation are already coming forward from many influencers in the electronic music scene, including Adam Beyer, Art Department, Audiofly, Apollonia, Chris Liebing, Damian Lazarus, Dubfire, Ida Engberg, Jamie Jones, Luciano, The Martinez Brothers, Nicole Moudaber and Tiga.