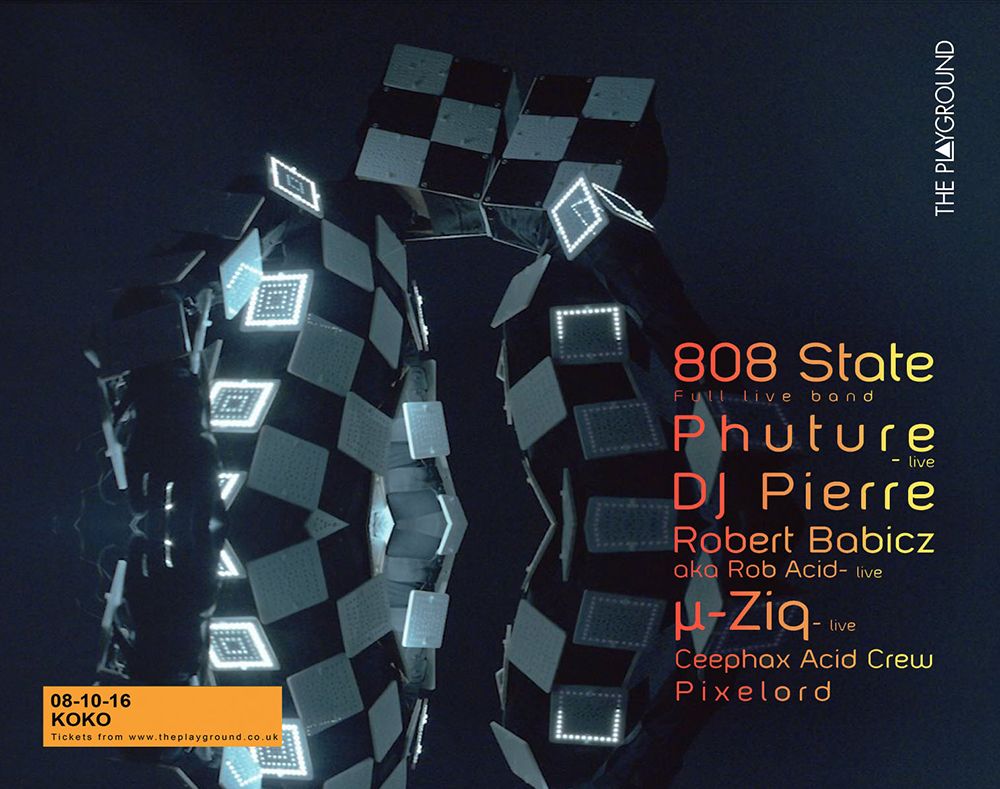 The Playground delves deep into the origins of Acid House and Techno programming another astoundingly unique event with the legendary 808 STATE who will be performing with the full live band (Graham Massey, Andrew Barker, Darren Partington) as well as the inventor of Acid House, DJ PIERRE and PHUTURE who will be performing a Live show. Further support comes from ROBERT BABICZ aka ROB ACID, Planet Mu Label Head u-Ziq aka Mike Paradinas and CEEPHAX ACID CREW.

► 808 STATE- LIVE. are widely regarded as one of the most influential Acid House pioneers. Formed in 1987 in Manchester, they took their name from the Roland TR-808 drum machine. They were formed by Graham Massey, Martin Price and Gerald Simpson, and they released their debut album, Newbuild, in September 1988. The band's song "Pacific State" was released as a single, peaking at #10 in the UK Singles Chart. 808 State's next album was released in 1991, Ex:el, which featured vocals from Bernard Sumner and Björk. Other hits included "In Yer Face" (UK #9), "Cubik Olympic" (UK #10) and "Lift" (UK #38)

► PHUTURE- LIVE. Phuture is a Chicago-based acid-house group founded in 1985 by Spanky, DJ Pierre and Herb J. The group's 12-minute track "Acid Tracks" (1987) is one of several recordings that lay claim to being the first-ever acid house record. "Acid Tracks" featured characteristic bass lines from the Roland TB-303 bass synthesizer—which was manipulated to produce resonant and squelchy sounds uncharacteristic for a bass guitar it was designed to emulate. The track rose to popularity at DJ Ron Hardy's Music Box club in Chicago and has since been re-pressed many times.

► DJ PIERRE- Chicago-born Nathaniel Pierre Jones is a true dance music pioneer. Recording as DJ Pierre, Phortune, Phantasy Club, Photon Inc and a myriad of other aliases, it was his early acid house group Phuture – with friends Spanky and Herb J – that changed the game forever with the Acid Tracks EP in 1987, an undisputed classic and key moment in dance music.

► ROBERT BABICZ aka Rob Acid- is a Polish music producer, mastering engineer and live performer living in Cologne, Germany. With a career spanning nearly two decades covering genres from techno to acid house to minimal, Babicz has also been known under the pseudonyms Rob Acid, Acid Warrior, Department of Dance and Sontec amongst many others. He has released a number of very well respected records on labels such as Kompakt, Treibstoff, Bedrock, Intec Digital and Steve Bug’s Audiomatique, as well his own labels, Junkfood and Babiczstyle. He is well known as a live performer, never a DJ, as he uses synths and live equipment and improvises in every set he plays.

►µ-Ziq- Michael Paradinas (born 1971) records primarily under the name µ-Ziq (pronounced “music”) in addition to a large number of aliases. He runs the british electronic label Planet Mu and first emerged on Rephlex in 1993 with the album ‘Tango N’Vectif’ and has collaborated with Aphex Twin and Speedy J among others. Mike Paradinas has become one of the very few artists working with electronics to produce a recognisable and personalised sound while at the same time mixing far-reaching experimentalism with accessibility through infectious melodies and rhythms.

► CEEPHAX ACID CREW- Ceephax Acid Crew (often simply credited as Ceephax) is a British acid house, and drum and bass electronic musician named Andy Jenkinson. Jenkinson is also known simply by the pseudonym Ceephax, which is a pun on the BBC teletext service Ceefax. He is the brother of Tom Jenkinson, AKA Squarepusher, and for a while he shared living quarters with Jonathan Taylor, AKA Global Goon. Underground record labels Firstcask, Lo Records and Breakin’ Records each released music by Ceephax (his first record released when he was 18 years old). The more famous Rephlex Records and even more famous Warp Records both released remixes of Squarepusher by Ceephax which sound nothing like the originals.

► PIXELORD- “Human.exe” is the new LP taken from cyber-futurism experimental electronic artist Alexey Devyanin aka Pixelord slated for release on the 9th September whilst the first single, ‘Robo’ will be dropped on the 5th August via Hyperboloid Records. Pixelord has garnered previous support from the likes of Pitchfork, Resident Advisor, Thump, FACT, Boiler Room, has played at Berghain, Talinn Music Week, Electric Castle alongside The Prodigy, State-X New Forms with James Blake and Dark Star, toured the US and China extensively, remixed everyone from 813, Machinedrum, Eprom, Herobust, Ryan Hemsworth and released music for tastemaker labels such as Error Broadcast, Leisure System, Infinite Machine and Hit & Hope to critical acclaim.