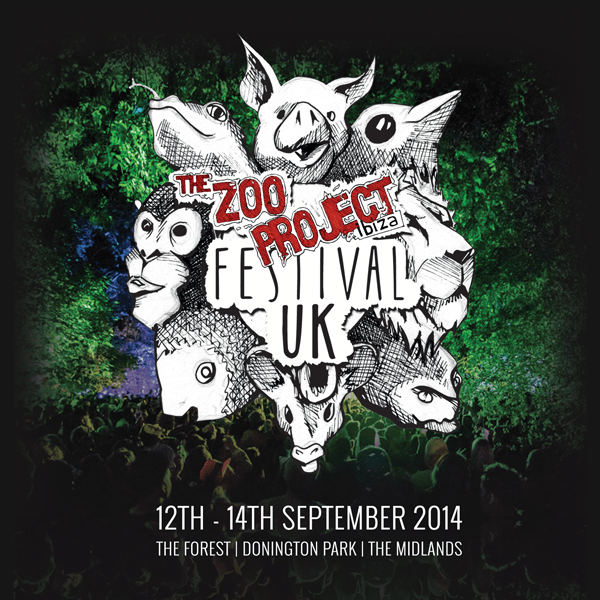 The stages are set, the players all booked and the animals ready to roar, for what looks set to be one of the most exciting, original and decadent festivals in the UK this summer as Ibiza hits the Midlands once again. Three more days of debauchery in the enchanted mayhem of Donington Park Forest brought to you by world-renowned Ibizan party Dons, The Zoo Project.

The Zoo Project Festival will feature an array of genres within the electronic music spectrum – featuring house, drum & bass, hip-hop, electro, UK bass, garage, ambient, experimental and more. Influential crate-diggers will spin alongside the hottest new beatsmiths, continuing the Zoo Project mantra of unearthing underground talent before they take off.

VICE Magazine’s electronic music channel Thump have been added to the roster of esteemed stage hosts this year – they will host and curate James Zabiela’s Born Electric stage. Expect this to be massive!

For the first time, Red Bull Studios will be bringing a flavour of their London-based studio to the heart of Zoo Project festival. Stand-out talent fresh from Red Bull Studios London will combine with pioneers such as The Streets front man Mike Skinner, Manchester’s most loved Mr. Scruff, the legendary Nightmares on Wax, party starter Shy FX, and leaders of the new school T Williams, Ten Walls, Squarehead, Jonny Dub and Jigsaw.

Further surprises and announcements will be made via Zoo Project Festival’s social media networks.

Removing boundaries between artists and audience, performers and partiers has always been at the heart of The Zoo Project Festival. Ibiza’s finest ‘The Minx FX’ will perform alongside the UK’s biggest performance company Area 51 throughout the event, expect world-class performance from animalistic acrobats, dancers, contortionists & more.

The Zoo Project say: “This one’s not for the feint- hearted! Roll on September!”

It’s never The Zoo Project Festival without a large dose of OTT hedonism and carnivalesque vibe. Release your animal, there’s no Zoo without you! Check a wrap up of 2013’s highlights here:

Standard weekend tickets are currently on sale at £85 with VIP available at £119. One and two day tickets on sale starting from just £30 – www.thezooproject-festival.com/tickets.