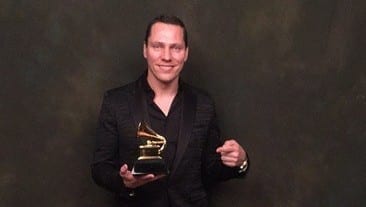 From his tremendous original songs and remixes, unforgettable live shows and penchant for offering some of todays brightest stars their first big breaks, Tiësto is a dance music superstar in the truest sense. Voted “The Greatest DJ Of All Time” by Mixmag and the “#1” DJ by Rolling Stone, Tiësto was one of the first dance music artists to break through into popular culture having performed at the 2004 Athens Olympic Games while also having a statue at the famed Madame Tussauds created in his honor. He’s also the only dance music artist to have their own channel on Sirius XM; putting Tiësto in the company of Elvis Presley, Bruce Springsteen, Pearl Jam, The Grateful Dead and Eminem.

Despite a career filled with so many achievements, there’s one award that had proven elusive for Tiësto. He was first nominated for a Grammy Award in 2007 for his album Elements Of Life in the “Best Electronic/Dance Album” category but did not take home the prize. Little did any of us know that in just a few years time Dance Music would take over the world – but there’s Tiësto on top and at the forefront of the industry. So here we are nearly ten years since his first Grammy nomination Tiësto brings home the music industry’s top award for his remix of John Legend’s “All Of Me.”

“Over the years I’ve been lucky enough to accomplish so many of my dreams and goals but it wasn’t until last night that I was able to bring home something that I’ve wanted for a very long time. It was such an honor to step on that stage and accept the Grammy for Best Remix for my remix of John Legend’s “All Of Me”. Receiving the award for this remix was even more special because I made this remix only because I loved the song and thought I could add something special to it and John agreed! I want to dedicate this award to all of my fans for their love and support,” Tiësto says

Tiësto will be celebrating his award in his typical fashion – by playing live and making new music for his fans. It will be a busy spring as Tiësto preps the fourth installment of his acclaimed “Club Life” album series. After volumes dedicated to Las Vegas, Miami and Stockholm can you guess where his heart lies for the newest edition? More on that soon.