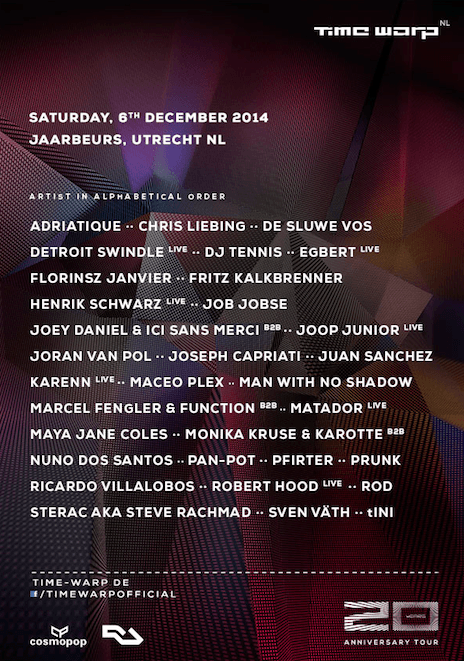 Marking their 20th year in techno, electronic institution Time Warp takeover Jaarbeurs, Utrecht this December 6th for their Netherlands birthday edition. With a lineup that already reads like a who’s who in underground dance music; Time Warp have announced techno-titan Joseph Capriati will also be part of their 20th birthday. With Sven Väth, Fritz Kalkbrenner, Ricardo Villalobos, Chris Liebing, Maceo Plex, Maya Jane Coles, Karenn, Sterac, Detroit Swindle plus many more, you’ll need to move quickly to be part of this, tickets are on sale now at www.time-warp.de

From early beginnings as a German rave, this year Time Warp NL will be all about celebrating the 20th anniversary of their reign, with a phenomenal show fusing state-of-the-art production techniques to mark the occasion. The entire audience in the Jaarbeurs will be immersed in this multi-sensory show, as the Time Warp’s famed high-quality stage designs and light shows are taken to the next technical level. Coming all the way from Mannheim to Utrecht will be the two mainstays, The Cave 2.0 stage with specialist design.

Joseph Capriati, a name strong on the radar of any discerning techno-lover makes a firm addition to the Time Warp NL lineup. A part of Adam Beyer’s Drumcode label, plus a resident at Marco Corola’s ‘Music On’, Joseph will deliver a energetic, memorable set. And with a new album ‘Ways Over Water’ out this week, German soul man Fritz Kalkbrenner also performs, bringing to Jaarbeurs a very special live set.

Other notable cases in this edition of Time Warp NL, which is presenting one extra techno area this year, is the large amount of live-acts. The night will see live performances by Fritz Kalkbrenner, Robert Hood, Egbert, Detroit Swindle, Henrik Schwarz, Karenn, Joop Junior and Matador.

Besides this the well-known rave features a couple of striking back2back DJ sets. A German huddle with Monika Kruse and Karotte behind the decks together, the Dutch occasional duo Joey Daniel and Ici Sans Merci, but also a promising techno set by Marcel Fengler with Function.

Tickets
Tickets for Time Warp NL are now available through the website, priced €49.
Later a second batch of tickets à € 55,- will follow. Special tickets are also available, including hotel vouchers or backstage entry. All tickets and other event info: www.time-warp.de.
Tickets can also be bought through a ‘deposit scheme’, making it possible to pay only a deposit for a ticket and pay the rest of the amount shortly before the event (Note: If you fail to pay the balance by the prescribed date, you will neither receive tickets or refund of the deposit).