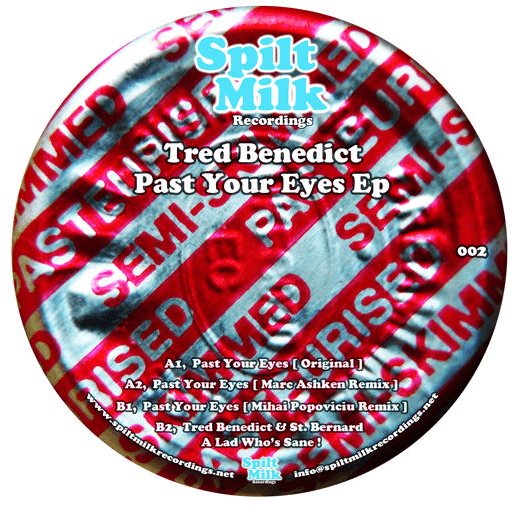 Spilt Milk Recordings is back with its second release this July, entitled ‘Past Your Eyes’ and coming courtesy of brand founder Tred Benedict, backed with remixes from Marc Ashken and Mihai Popoviciu.

London’s Tred Benedict is the founder of promoter turned record label brand Spilt Milk and has been integral in London’s underground House and Techno scene for many years now. Having been responsible for both the Spilt Milk and Don’t Techno Shit events in the U.K capital Tred’s played alongside the likes of Nina Kraviz, Sven Vath, Sascha Dive, Maya Jane Coles and Joy Orbison over the years, here we see him kick start his production career and what better place to do so than the newly formed Spilt Milk Recordings imprint which saw its inaugural release pick up support from the likes of Mr.G, Huxley, Joris Voorn and Art Department.

Title-track ‘Past Your Eyes’ kicks off the release and sees Tred deliver a haunting slice of house music led by brooding atmospherics and modulating vocal murmurs running alongside ever-evolving sparse rhythms, squelching acid licks and weighty sub bass drones. Marc Ashken, who’s ‘Lupine’ EP launched the label, steps up to remix ‘Past Your Eyes’ next and in typical fashion Ashken turns in a hypnotic, groove-led interpretation laid out over six minutes with a loopy, subtly unfolding aesthetic.

Romania’s Mihai Popoviciu turns in his take of ‘Past Your Eyes’ next, veering things into raw, minimal realms with flourishing, ethereal pad swells, dubby echoe swirls and an unfaltering percussive momentum. Last up to round off the package is Benedict & St. Bernard’s ‘A Lad Who’s Sane!’ which closes things on a deeper tip with warbling pad sequences, crunchy drums and stab-led bass hooks.

Tred Benedict’s ‘Past Your Eyes’ EP is out on Spilt Milk Recordings 6th July 2015.