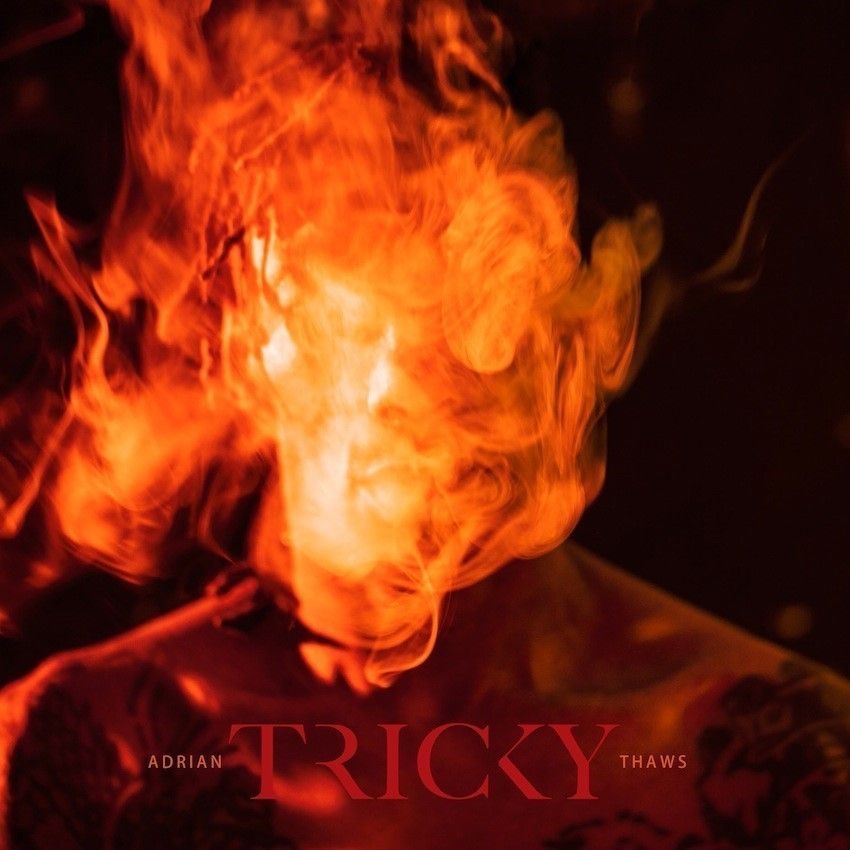 Calling it Adrian Thaws is saying you don’t really know me,” says Tricky, explaining the title of his 11th album. “So many times people have tried to put a finger on me and every album I go to a different place.”

It’s typical of one of music’s most unpredictable characters that the first album to bear his birth name is one of his least introspective. Adrian Thaws is a vivid, attention-grabbing set of songs which roam from hip hop to house, jazz to blues, rock to reggae. It was recorded in Tricky’s home studio in London, where he’s living again after almost two decades in New York, Los Angeles and Paris, and features an international crew of collaborators: Francesca Belmonte, Nneka, Mykki Blanco, Bella Gotti, Tirzah, Blue Daisy and Oh Land. It’s designed to be played loud.

“I suppose this is my club/hip hop album,” he says. “I’ve only heard my music a few times in a club but I grew up in clubs from when I was 14: blues parties, hip hop clubs, a few raves.  I’m not known for doing club music but this album has some club tracks on it ‹ well, what I would consider club music.”

Tricky makes complicated music because Adrian Thaws has had a complicated life. Born in 1968, he grew up in an extended family that was both black and white, urban and rural, containing strong women and volatile men. His choice of cover versions is revealing. Janet Kaye’s 1979 lovers rock classic Silly Games reminds him of his childhood in Bristol’s Knowle West district. London Posse’s 1990 track Gangster Chronicle harks back to his musical apprenticeship with the Wild Bunch and Massive Attack under the name Tricky Kid before he launched his solo career with 1995’s startling Maxinquaye.

Tricky has always used music to explore the different, sometimes contradictory facets of his background and personality. “I can be anything I want when I do an album,” he says. “I could be a woman, I could be a man. It’s great to be able to be all these different things.”

Adrian Thaws is Tricky’s second release on his own False Idols label via !K7, hard on the heels of his 2013 album, also called False Idols. One thing that makes Adrian Thaws such a gripping, commanding album is the prominence of Tricky’s own vocals but, as always, he’s brought company. Returning from False Idols is Irish-Italian singer Francesca Belmonte, who sings on Lonnie Listen, Something in the Way, I Had a Dream and new single Nicotine Love ‹ Tricky’s first full-blown house track. “Fran can take an influence and make it her own,” Tricky says approvingly. German-Nigerian singer Nneka, who also sang on False Idols, reappears on the smoky hip hop blues of Keep Me in Your Shake. “She’s really easy to work with,” he says. “I wish she was more well known. We need more women like that.”

There are new faces too. British grime MC Bella Gotti (formerly known as Nolay) is a dynamically belligerent presence on the two-fisted hip hop tracks Gangster Chronicle and Why Don’t You. “Her style is so aggressive,” says Tricky. “There’s nothing worse than weak hip hop. If I’m going to do it I want it to be intense.” American MC Mykki Blanco, who joins Francesca on Lonnie Listen’s android hip hop, impressed Tricky when he supported him at a show in Germany. “I saw this dude in a mini-skirt and high heels and he was so aggressive on stage. Some of the crowd were like what the fuck? Imagine a big dude with a woman’s rage ‹ that’s someone who can do some serious damage.”

London singer Tirzah, who performs Silly Games and ominous opening track Sun Down with hints of Martina’s deadpan cool, was introduced to Tricky by his daughter Mazy “She called me and said dad will you work with Tirzah. That’s my daughter A&Ring me, which is cool as fuck.” Mazy also appears on the album as Silver Tongue. Danish singer-songwriter Oh Land duets with Tricky on Right Here’s rumbling synth-pop. British electronic musician Blue Daisy, who co-wrote and remixed My Palestine Girl, was another tour bus discovery. “We ended up drinking whisky, smoking weed and listening to music on the bus till five in the morning. I really liked the guy. I said you know what? My new album, come on it.”

There’s more political drama on The Unloved, a street-corner revolutionary poem delivered by a friend called AJ. “I don’t understand how music has got so lost,” says Tricky. “This is what people used to do – speak about politics and society. We’re in fucked-up times now. I might not change anything but at least I’m going to have a voice.”

The confidence and energy of Adrian Thaws reflects Tricky’s newfound sense of stability. After several years of uncertainly changing labels and managers, Tricky finally feels settled with !K7, where he’s tidying up a lot of loose ends.

“I’ve been all over the place for years,” he admits. “No discipline. I’ve just been making a mess and moving on. I can’t really blame anybody. It is what it is. But I’m getting my shit together. Now I’m developing as a person my music’s getting stronger.”

This renewed purpose explains why Adrian Thaws arrives just 16 months after False Idols. There are more projects on the way including a covers record (his first since Nearly God) and Francesca Belmonte’s debut album. Tricky has often found it difficult dealing with the music industry but making records is second nature and now there’s nothing holding him back.

“Music is easy,” he says with a husky laugh. “You’ve just got to be honest with yourself.”

“Adrian Thaws” is out September 8th on False Idols in association with !K7 Records.