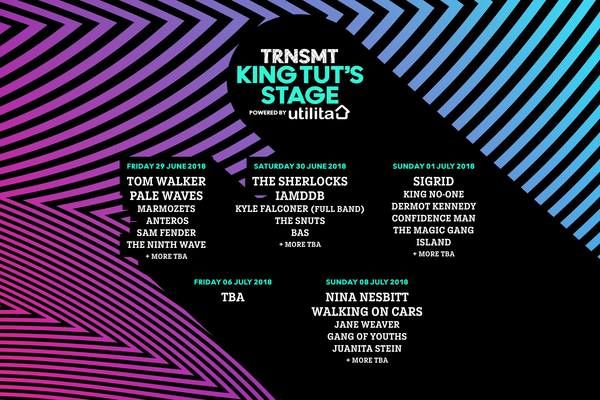 Following yesterday's addition of headliners Arctic Monkeys, TRNSMT Festivalcontinues its exciting line-up announcements this week, with the addition of over 20 of the best up and coming stars in the music industry to the King Tut’s Stage Powered by Utilita Energy with Sigrid, Marmozets, Pale Waves, Anteros, Nina Nesbitt and The Sherlocks joining an immense amount of talent for TRNSMT’s 2nd stage. Tickets go on general sale 9am Thursday 1st February, from www.TRNSMTfest.com

Earlier today, TRNSMT Festival live streamed a piece of street art with the line-up for theKing Tut’s Stage Powered by Utilita Energy at the music venue SWG3 in Glasgow.  A wall at the music venue became a large canvas, with the artwork painted revealing each of the acts on the stage.

Norwegian singer-songwriter and all round pop sensation Sigrid is an exciting addition to the King Tut's Stage Powered by Utilita Energy on Sunday 1st July. The 21 year old recently became one of the youngest musicians ever to be honoured with BBC Music's Sound of 2018, which has previously backed artists like Ellie Goulding, Sam Smith and Adele, and suggests 2018 will be her biggest year yet. With her anthemic electro-pop tunes 'Don't Kill My Vibe' and 'Strangers', Sigrid is sure to put on a show at TRNSMT2018.

Tom Walker had an incredible 2017, winning Best UK Newcomer at the SSE Scottish Music Awards, a support slot with fellow TRNSMT act The Script in the US plus sold out dates across the UK, including the famous King Tut’s Wah Wah Hut and he makes a welcomed-addition to TRNSMT’s opening day of the festival.

Tom Walker said: “Can’t believe my first Scottish festival is TRNSMT and I’m going to be headlining the King Tut’s Stage Powered by Utilita Energy. What an honour, I’m absolutely buzzing!”
Edinburgh songstress and all-round magnetic popstar Nina Nesbitt makes her TRNSMTdebut on the King Tut’s Stage Powered by Utilita Energy on the festival’s final day, Sunday 8th July. The 23-year-old is collecting various Hollywood royalty as fans including Chloë Grace Moretz and Taylor Swift and at TRNSMT 2018, she’ll receive a welcome home as only Scottish crowds can.

Nina Nesbitt said: "It’s always amazing to come back to your home country to play and have a few tins ha! I can’t wait to play TRNSMT for the first time this year.”
The Sherlocks are a fitting addition to the Liam Gallagher headlined TRNSMT date as the four piece were Liam’s main support on the European leg of his tour. The band, which is made up of two sets of brothers, released their debut album which went to number 6 in the official UK charts and have proved that indie rock is alive and well in the UK.

The Sherlocks said: “Scottish crowds have always been very kind to us and they’re the wildest crowds we’ve played to! BRING IT ON TRNSMT!!”
Indie pop sensations Pale Waves join TRNSMT’s line-up after a phenomenal year making waves in the indie scene and creating incredibly catchy, irresistible pop hooks and soaring melodies on tracks such as ‘There’s a Honey’ and ‘Television Romance’.

Marmozets stormed onto the scene with 2014’s debut album The Weird and Wonderful Marmozets and 2018 brings its much commended and fearless follow up Knowing What You Know Now.

London four piece Anteros return to TRNSMT after their debut on the Jack Rocks Stage in 2017 saw a packed-out tent lap up the band’s spellbinding, perfectly crafted indie pop.

Anteros said: “TRNSMT was one of our highlights last year. We cannot wait to be back in Glasgow this year. See you there.”
An act who is no stranger to TRNSMT, is Kyle Falconer (full band), who’ll play on Saturday 30th June alongside Liam Gallagher, which is fitting as Kyle recently supported the Gallagher brother at his sold out gig at The SSE Hydro in December. Following over a decade in the iconic Scottish band The View, Falconer will bring his vibrant solo set to Glasgow Green.

Following an electric sold-out show in King Tut’s at the end of 2017, The Snuts are set to embark on a sold-out Scottish tour including shows in Edinburgh, Dundee and Aberdeen. The West-Lothian band are sure to create a mass sing-a-long to remember at TRNSMTthis year with their song ‘Glasgow’ a stand out in sets.

Brighton foursome The Magic Gang will take to the King Tut’s Stage Powered by Utilita Energy on Sunday 1st July, in a year that will see them release their highly anticipated debut album after crafting their live set on tour with Sundara Karma and Wolf Alice.

Yesterday, TRNSMT announced the incredible Arctic Monkeys as headliners for Sunday 1st July which is currently the band’s only UK festival date. The Sheffield band are joined by Interpol, Blossoms, Nothing But Thieves, Declan McKenna, Miles Kane plus Tom Grennan. With Stereophonics, Liam Gallagher, Arctic Monkeys, and The Killers as headliners, there’s no doubt that Glasgow is the place to be for music fans next June and July and today, the bands just keep on coming.

Winning ‘Best New Festival’ at the UK Festival Awards, TRNSMT was heralded by fans and critics in its inaugural year for its incredible audience, atmosphere and perfect mix of international and local talent. With more acts to be announced TRNSMT is already the ultimate festival line-up for music fans.