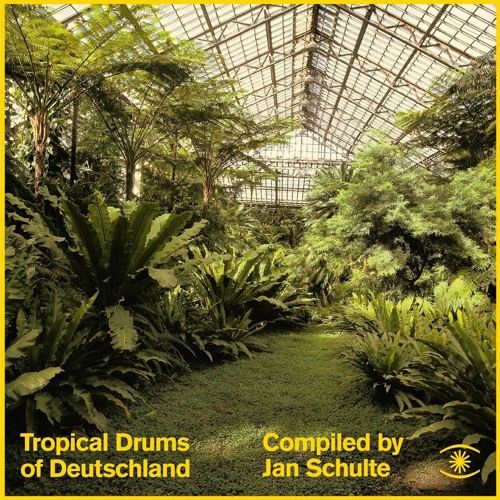 Copenhagen’s Music For Dreams label has drummed up another amazing concept album – a double vinyl and digital release of personal favourites compiled by Salon Des Amateurs resident Jan Schulte aka Müller, aka Bufiman.

Entitled ‘Tropcial Drums of Deutschland’, the 13 track compilation will be released on vinyl on Wednesday 19th April 2017, with digital and stream to be released on Friday 5th May 2017.

The album, which has already received heavy tastemaker support, features Jan Schulte’s prize collection of ‘tropical drum’ music made in and around Germany in the 80s. In fact Schulte says “the compilation stems from a general fascination for music that describes places where the artists have never been.”

Music For Dreams says “while much of the music on ‘Tropical Drums Of Deutschland’ came out on small labels in the late 80s and featured musical traditions from foreign lands, the content of the two-disc vinyl collection deals much more with introspection than exploitation. Schulte has also made a couple of exclusive edits for the album release.

The compilation follows a couple of collaborative EPs from Schulte late last year. Themes From Great Cities put out ‘Kabuki’ from Young Wolf, Schulte's team-up with Young Marco. He also worked with DJ Normal on an upcoming Aiwo Rec. 12-inch, ‘The 5 Elements – Water & Air’, under his Bufiman alias.

According to all maps and witness accounts, Germany does not officially have any tropical forests! This is of no concern to Schulte however, who has unearthed many stunning examples of tropical drum music recorded there. Perhaps the number of botanical gardens and palm houses in Germany confused musicians into mistaking the climate, or maybe it was just a happy blend of escapism and multi-cultural integration within musical scenes that spawned such a curious output of indefinable tribal folk jazz.

The musicians involved were mainly traditionally schooled, born and raised in Germany. At that time to be interested in foreign folk music might have seemed a gimmick to some, what with the emerging "world music boom" already snowballing into the mainstream. Songs about the jungle or the rainforest made by people that know the rainforest only from television and books. Somehow I think you can hear their mythical imagination and fantasy in those tracks," he explains.

The fantasy jungle can certainly be heard in the extensive use of wildlife samples on both ‘Tagtraum Eines Elefanten’ by Argile and ‘Wuhan Wuchang’ by Total Art Of Percussion; or on the repetitive and trance inducing drum circle re-enactments of Ralf Nowys ‘Akili Mali’ and Bob Moses & Billy Martin’s "Boat Song Part II". And while Austrian band Sanza stands out with their interpretation of the traditional folk song ‘Sounou’, many of the inclusions take an avant-garde stance towards their visions of the tropics. The works of Om Buschmann and Trimopen seem to convey the stark and feverish nature of the jungle and its dangers, without relying on clichés.  And while there is certainly a European approach in the production techniques on many of these recordings, the artists created something beyond all templates. In fusing folk music traditions from various corners of the world with avant-garde jazz improvisation and a distinctly European sound, they carved out a path of their own.

Düsseldorf-based Jan Schulte has been following this path with his own productions in the past few years. During the present resurgence of tribal influences in underground dance music, his recordings under the alias Wolf Müller and Bufiman have stood out as the most interesting, funky and mind-blowing within this niche. With the compilation ‘Tropical Drums Of Deutschland’ on Music For Dreams, Jan Schulte re-traces this path to its origins. With the inclusion of two exclusive edits he also engages and re-examines these tracks and incorporates his own musical expression into the mix.

Jan Schulte ‘Tropical Drums Of Deutschland’ is released by Music For Dreams on vinyl on Wednesday 19th April, with digital and stream to be released on Friday 5th May 2017.