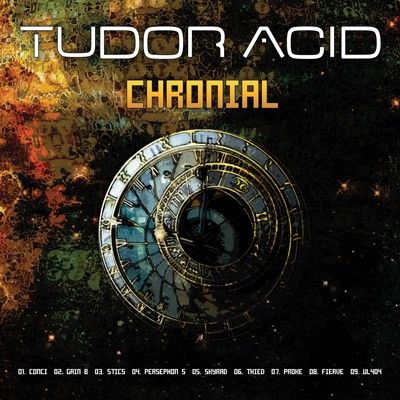 Tudor Acid (aka Richard Wigglesworth) returns to his Tudor Beats label with a new album of melodic and ambient techno.

Entitled ‘Chronial’ due to the tracks being not only written in chronological order during 2014 but also as a chronicle of the last year, Tudor Acid says “It works on two levels”. His main priority for this album is that the music should be accessible to all. Whilst it has similarities to Detroit techno, it shouldn’t be necessary to have a deep knowledge of electronic music to appreciate it because “explanation kills the feeling for me.”

‘Chronial’ also takes into account the last twenty years or more of sound that has influenced Tudor Acid. “I spent a lot of time and effort recreating the sounds I used on my first tracks years ago.  The opening glassy sound on the first track ‘Conci’ is a really evocative sound for me. When I first heard that sound on a keyboard 20 years ago I was really captivated by it because it felt like being inside a glacier. It is a sound I keep going back to.”

‘Stics’ has an unusual drum machine, as all the drum samples are from twigs that Tudor Acid picked up in the local park and has already been described by Warp artist, Mira Calix, as a ‘real twiggy treat’.  Listeners to Kirsti Weir’s Null + Void show will already have heard the electro-tinged ‘Persephon 5’ back in June. The track ‘Skyrad’ appears to be a key moment and central cornerstone of the album. “Writing ‘Skyrad’ seems to me to have been be a turning point in the album because by this stage I realised that the tracks were writing themselves.  I thought that the hardest point on this album would be following up ‘Thied’, because it felt like quite a deep and hard track.  I followed it up with ‘Proke’. Proke just started with an oboe sound that I thought sounded nice. But then I was actually quite surprised that this too turned into quite a deep track by the time I’d finished with it.”  Album closer ‘UL404’ again plays tricks with time.  “That’s a quite a simple idea, to do a track which is 13 minutes long which sounds like a short loop repeating but actually the notes are slightly different each time in a loose way. I just really enjoyed playing that chord sequence on the keyboard slightly differently each time and being able to be loose rather than rigid.”

As Richard summarises “this is probably the first album of mine that I am able to experience as a listener without analyzing the choices I made along the way. This is mainly because these tracks seem to have a life of their own.”