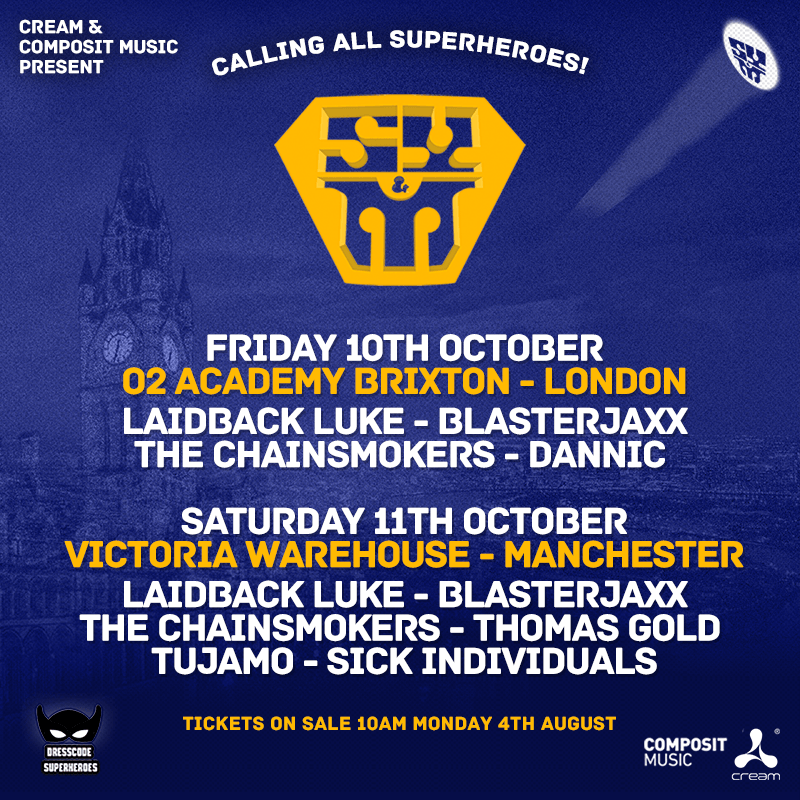 We are pleased to announce the return of Laidback Luke to the UK with two very exclusive Super You&Me shows in London on Friday 10th October at O” Academy Brixton and Manchester on Saturday 11th October at Victoria Warehouse.

As one of dance music’s innovators, Laidback Luke continually breaks the musical mould, and has created Super You&Me as a party concept bringing the fun factor back to the dancefloor. It’s a place where artists don’t take themselves too seriously and fans are invited to join in with the Superhero theme. This simple ethos is what has made it one of the most respected brands in clubbing today, packing out venues from Miami to LA, from Amsterdam to New York and beyond, hosting arenas at some of the world’s biggest festivals including Creamfields, Escape from Wonderland, EDC Las Vegas and Tomorrowland. Super You&Me has featured some of the world’s biggest artists along the way including Steve Aoki, Avicii, Diplo, Afrojack, Martin Solveig and Bingo Players all supporting the now infamous Super hero theme.

“With Super You&Me I love to embrace the sound of now but also to present the sounds of what is yet to come. Fans know that this is where we host talent that they may not have discovered yet combined with their biggest (Super) hero’s. But the kicker really is that the biggest Superheroes are the fans themselves and I love how the UK crowd especially is so up for a fun party” Laidback Luke

With an ear for breaking tunes and an eye for game changing talent, his Mixmash Records imprint is responsible for some of dance music’s biggest hits. Luke is also responsible for nurturing some of the finest game changing talent to have broken through over the last few years and DJ’s like Afrojack, Avicii and Steve Angello still credit Luke and his online forum as one of the first places where they got guidance from.

In October Super You&Me will be taking over two of the UK’s leading music venues bringing with it a lorry load of production for what is set to be a very Dutch affair, joining him will be some of the leading names in the business alongside a selection of the fresh new wave of emerging talent from Holland’s big room house scene including DJ/Production duo Blasterjaxx, The Chainsmokers, Dannic, Thomas Gold, Tujamo and Sick Individuals.

What super hero will you come as?