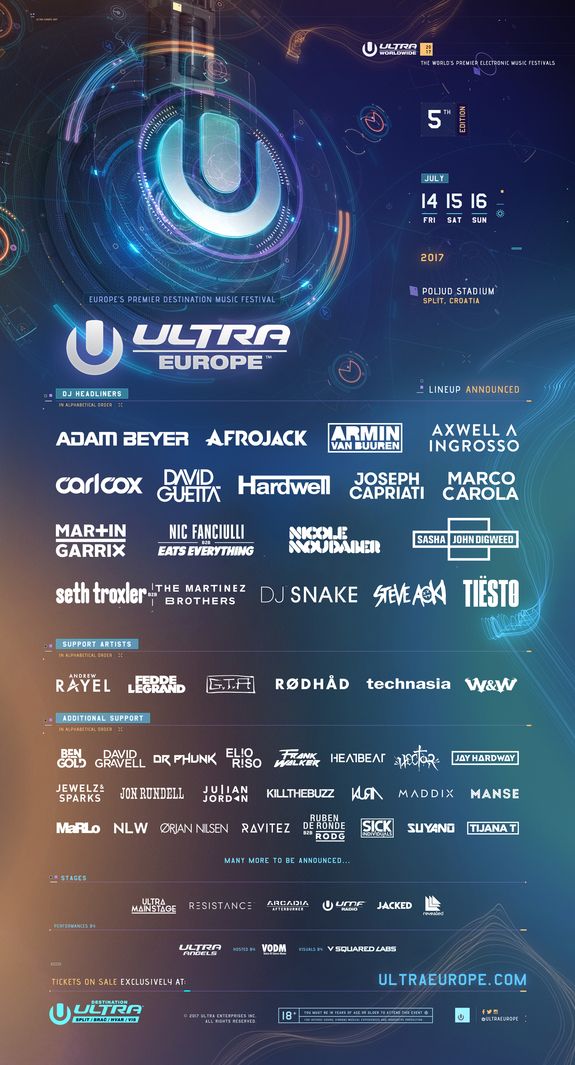 RESISTANCE, having recently announced an eight-week Ibiza residency at Privilege this summer, will take on a larger role than ever before at ULTRA Europe. Some of the biggest names in house and techno will be playing back-to-back sets including (in alphabetical order) Nic Fanciulli b2b Eats Everything, Sasha & John Digweed and Seth Troxler b2b The Martinez Brothers. Also headlining will be techno legends Adam Beyer, Carl Cox, Joseph Capriati, Marco Carola and Nicole Moudaber.

Support acts will descend from far and wide to bring a diverse selection of dance music to the event, with Andrew Rayel, Fedde Le Grand, GTA, Rødhåd, Technasia and W&W all confirmed.

ULTRA Europe will once more host four versatile stages in and around Split's Poljud Stadium. Alongside the aforementioned Main Stage and RESISTANCE Stage, the UMF Radio Stage and the Arcadia Spectacular ‘Afterburner’ are set to return. Two highly esteemed labels, Jacked and Revealed, are each scheduled to host one day at the Afterburner.

The main event will play a signature role in the wider, weeklong Destination ULTRA experience, with lineups soon to be revealed for the RESISTANCE Opening Party, Brač Regatta, ULTRA Beach andRESISTANCE Vis over the coming weeks.

Tickets for ULTRA Europe are now available exclusively at UltraEurope,com/tickets. With Early Bird tickets having already sold out, fans will have to act quickly to snatch up the remaining few at €169, after which, the price will increase to €199. For those looking to travel with friends, ULTRA Passport Packs are also on sale exclusively to ULTRA Passport holders. Once five tickets are purchased, a sixth ticket is unlocked.