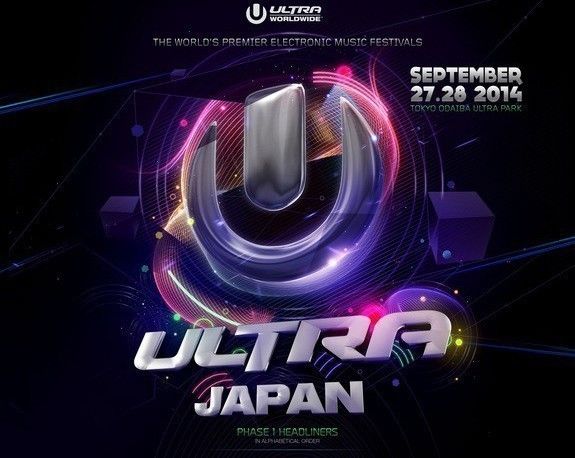 Following its announcement and still 8 weeks prior to the festival opening its gates, Ultra Japan sold out almost in an instant. Just a few months after the massive success of Ultra Korea, Japan will become the second Asian country to hold the world’s premier dance music event, taking place September 27th & 28th at Tokyo Obaiba Ultra Park. A short time ago fans were given a glimpse of the weekends festivities with a phase 1 lineup release featuring the likes of international DJ megastars including Afrojack, Axwell & Ingrosso, Kaskade and Steve Angello and more. Now less than a month to go until gates open, Ultra Japan reveals its jaw dropping phase 2 lineup!

A quick glance at the phase 2 line up release makes it clear to see that Ultra Japan is sure to rival even the best events Ultra Worldwide has previously had to offer. With newly announced names including Darren Emerson, Far East Movement, Just Be, Mark Knight, Nick Fanciulli, Pig & Dan, Sunnery James & Ryan Marciano and UMEK, Ultra Japan is rapidly shaping up to be one of the biggest Asian dance music events of 2014. Be sure to check out the full phase 2 lineup announcement at www.UltraJapan.com/lineup

Continuing its unstoppable expansion, Ultra Worldwide will be bringing its ultimate electronic music experience to Bangkok’s spectacular International Trade and Exhibition Center on 26th September for Road to Ultra Thailand presented by Samsung. In its very first installment and with confirmed headliners that include Alesso, Fedde Le Grand, Martin Garrix, Sunnery James & Ryan Marciano, W&W and a performance by Kryoman, this is sure to be a massive step forward in Ultra’s expansion into the Asian market. Tickets for this much-awaited event anticipated are sure to sell out – act now! roadtoultra.com/Thailand

After breaking their attendance record a few months ago with over 100,000 Ultra fans voyaging to Seoul’s Olympic Stadium Complex, Ultra Korea has now confirmed the dates for the 2015 festival as June 12-13. Keep checking umfkorea.com as Early Bird ticket and headliner information is soon to be released.