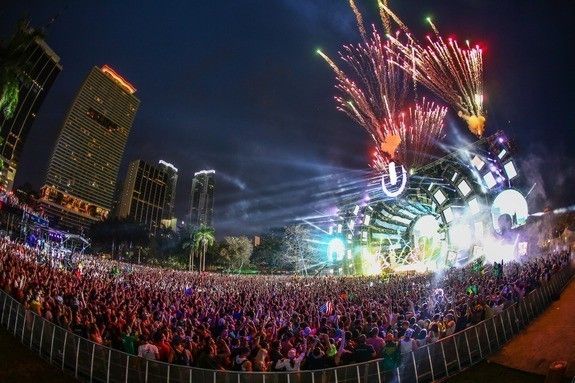 The sixteenth edition of Ultra Music Festival concluded this Sunday, March 30 as the mammoth sold out event entertained more than 165,000 party people from over 90 countries worldwide across three days (March 28-30) at the picturesque Bayfront Park venue in Downtown Miami. The 2014 edition marked the fifth consecutive year the festival has sold out.

The 2014 Ultra Live Stream produced by UMF TV garnered 9,655,615 views in total from more than 190 countries worldwide in just 3 days, compared to last year’s viewership of just over 11 million when the festival was two weekends and six days long. Ending the weekend’s proceedings in true style, the world’s #1 DJ (according to industry cornerstone DJ Mag) Hardwell closed out Sunday night on the gargantuan Main Stage, breaking the Swedish House Mafia’s live-stream record from their final ever performance last year. With 223,562 being the peak number of concurrent live-views (the amount of people watching at any one time) this Sunday, Hardwell just surpassed the Swedes, breaking their 2013 second-weekend record of 210,769.

Ultra Music Festival was also the #1 trending item on Facebook (for three days straight) and Twitter, with every artist who participated in the live stream – Armin Van Buuren, Adventure Club, Krewella and more – landing in the Top 10 trending items worldwide.

With hundreds of world-class DJs and live acts – almost 100 of whom were making their Ultra debuts – performing across eight stages over the entire weekend, without a doubt the biggest and best addition this year was that of the brand new Ultra Main Stage, designed and created by Ultra Music Festival’s Creative Director Richard Milstein and featuring mapping design by V Squred Lab’s Vello Virkhaus.

Appropriately dubbed ‘The Vortex’, this year’s Main Stage was one of the most visually impressive, technically advanced stages to be found anywhere on the planet. The Vortex played worthy host to the likes of Tiësto, Kaskade, Eric Prydz pres. HOLO and Zedd on Friday, Martin Garrix, Krewella, Nicky Romero, Alesso, Above & Beyond and deadmau5 who stepped in for an ailing Avicii on Saturday and Jack U (Skrillex & Diplo festival debut) Afrojack, Steve Angello, David Guetta and Hardwell on Sunday.

“This year’s Main Stage featured a dazzlingly massive structure of LED panels and lights surrounding the DJ platform in a conical shape, giving a sense of depth and dimensionality…” wrote Zel McCarthy of Billboard and The Hollywood Reporter (3/31/14), “While the Main Stage was designed to frame the headliners as superstars, even the smaller stages were adorned with LED panels and live-programmed lighting, giving fans a top-quality experience whether they were dancing to Claude VonStroke or Armin van Buuren. The Live Stage featured a range of artists from Dizzee Rascal to MGMT…”

“If you thought the main stage at Ultra Music Festival looked big last year, in 2014 it was major. Hundreds of thousands of people even tuned in to the livestream on YouTube just to see the magic as it happened in Miami’s Bayfront Park, where the likes of Steve Angello, Afrojack, Hardwell, Armin Van Buuren, Zedd, Diplo, and Tiësto played a sprawling field of revelers into a frenzy — and there were six other stages beyond that!” touted the Huffington Post (3/31/14).

Bass-heads were more than fulfilled by the Ultra Worldwide lineup, as Dillon Francis, Flosstradamus, RL Grime, DJ Snake, Carnage, Borgore, Adventure Club and more provided earth-shattering sets across Friday and Saturday. As the UMF Radio stage showcased everything from Dubstep, Drum & Bass and Trap, to Progressive, Nu-Disco and House, another highlight was this year’s brand new Stage 7, hosted by festival sponsors 7UP.

Following an independent report by the Washington Economics Group concerning the economic impacts of Ultra Music Festival 2013 on the Miami-Dade Economy – it has ben calculated that the economic impact generated from the 6 day event in 2013 was over $223million.

“…it is hard to argue the power that Ultra Music Festival holds in today’s electronic music market. Serving as one of the United States’ top music festivals, UMF has attracted fans from around the world for a weekend of Americanized electro flavor in Miami each year,” wraps Dancing Astronaut (3/31/14). At the conclusion of March, dance music fans make their pilgrimage to Bayfront Park to see exactly what UMF has in store. We have seen many artists rise to the top of their game when facing the beautiful Miami weather and receptive crowd, and this year was no exception.”

For up-to-the-minute information on anything related to Ultra Music Festival, stay tuned to the Official Website,Facebook and Twitter pages.