Seeb and R City - Under Your Skin 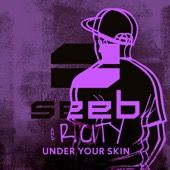 Seeb and R City - Under Your Skin

Worldwide chart toppers Seeb, now release their exciting new single, in collaboration with R City, ‘Under Your Skin’ via Virgin EMI (UK). Caribbean duo R.City have produced and written songs for the likes of Rihanna, Nicki Minaj, Beyoncé, Justin Bieber, Arianna Grande and Miley Cyrus. The upbeat vocals, soft synth melodies, and thumping bass-line come together to make a track which is perfect for festival season. ‘Under Your Skin’ has already been selected as the official theme song for the X-Games Norway 2017 in Oslo from March 8-12th. The trio will be performing the new single live at the X-Games on Saturday, March 11th. This will be televised and broadcast live in over 110 countries by ESPN.

"We’re so honoured to have had our new single ‘Under Your Skin’ chosen as the official theme song of the X-Games this year and we are thrilled to be asked to perform it live on TV in front of millions of viewers this Saturday! This event showcases some of the best athletes in the world and it is so inspiring for us to have even a small part in that incredible celebration. On March 11th we hope to add to that energy and give everyone, not only in the area but also at home, a show they will not soon forget!"

Based in Oslo, Norway, Simen, Espen and Nick have, until recently, been working as producers and songwriters, with several chart-topping tracks under their belts. Seeb released their first remixes in the spring of 2015. They soon had a Hype Machine #1 track with their fresh take on Kiesza´s ‘Cut Me Loose’, introducing their trademark cutting edge vocal tweaks and treatments. This was followed by a remix of Shawn Mendes ‘Stitches’, before they dropped their interpretation of Mike Posner´s track ‘I Took a Pill in Ibiza’. The now famous remix exploded on Spotify (with 800 million streams), giving the trio international traction almost overnight. It rose rapidly up the Global Spotify Charts and even sat as high as #4 on the Billboard Hot 100. Their debut single ‘Breathe’ was released in March 2016 and already has amassed over 80 million streams on Spotify. Their remix of Coldplay’s ‘Hymn For The Weekend’ currently sits in the Spotify Global Top 30 with over 282 million streams. Their next single ‘What Do You Love’ debuted live at the Hollywood Bowl in Los Angeles, California and has since then has racked over 25 million listens across Soundcloud and Spotify.