Underground Ibiza Announce Under The Influence 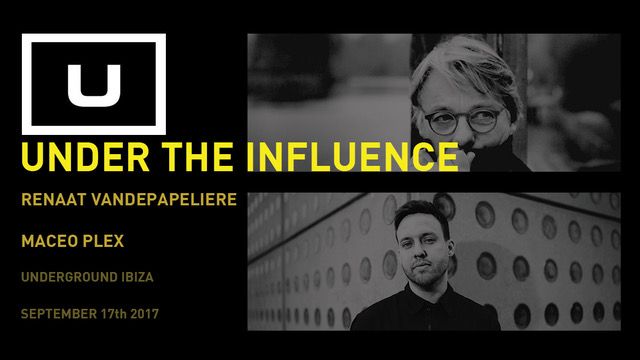 Underground Ibiza Announce Under The Influence

Under The Influence is a new club concept hosted at Underground Ibiza, a venue that set out to retain an authentic approach to Ibizan clubbing and reflects the original philosophy of the island as a place for all to party. Underground is a rare club that values quality music and an honest, inclusive clubbing experience over the ever-increasing prevalence of VIPs and fast-growing commercialism.

Under The Influence aims to bring together DJs and producers that have had a direct impact and influence over each other’s respective careers.

Debuting this new concept is renowned and respected label boss of R&S Records, Renaat Vandepapeliere. As a label head and DJ, Renaat’s reputation is one held with momentous regard. From his charming character and technical DJing to his renowned A&R skills, Renaat has helped shape modern underground dance music like few others.

He is joined by Maceo Plex, a long-term fan of Renaat, considering him and the output of his label as a vital influence on his sound. In 1983 Renaat founded R&S Records and by 1995 R&S was the leading underground dance label and authority, introducing Joey Beltram, Derrick May and Aphex Twin to the world and propelling Renaat to the higher echelons of underground dance music in the process.

‘R&S has played an influential role in the music I play and make as an artist and still does today. It is a testament of the skill Renaat has as a tastemaker and visionary in the record business. Looking forward to exploring the depths of our music collection’. Maceo Plex

Together, for one special event, they come together to showcase the music that has both influenced and shaped the industry they love and respect, all the while taking the crowd through the glorious heritage of the beautiful music that has been a part of their respective journeys in dance music.

We invite you to see this rare opportunity for them to perform together in Ibiza.