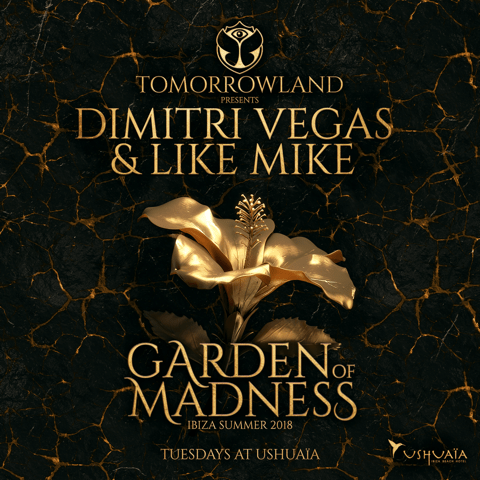 Forget those January blues because Ushuaïa Ibiza Beach Hotel is preparing for yet another scorching summer with the announcement of their first resident for 2018 – Tomorrowland presents Dimitri Vegas & Like Mike Garden of Madness.

After a wildly successful debut last summer, The Garden of Madness is set to return for an extra special extended run for its second season. Taking place every Tuesday from 19th June for fourteen consecutive weeks, Tomorrowland residents Dimitri Vegas & Like Mike will be back at the helm for what promises to be another summer of pure mayhem. The Belgian brothers will be calling on a host of A-list stars to join them throughout the season, with last year’s guests including the likes of Steve Angello, Steve Aoki, Marshmello, David Guetta, Lost Frequencies, Carnage and Nervo. Renowned for their impeccable productions, this year will feature a custom built stage by the production team behind Tomorrowland and Ushuaïa, with a stunning array of visuals that will ensure this is one of the most impressive shows on the white isle.

Speaking about their residency Dimitri Vegas & Like Mike said “We can’t wait to return to Ushuaïa this summer. Ibiza is one of our favourite places and nothing can beat the atmosphere of Ushuaïa. Last summer the fans were phenomenal, their passion and love for music is infectious. The production for the shows we got to create together with our Tomorrowland family and the Ushuaia team went beyond our wildest imagination. We’re excited to be announcing a new season so come join us for what will be the best Ibiza season ever!”.

Belgian brothers Dimitri Vegas & Like Mike have fast become one of the hottest tickets in dance music. Renowned for their musical part in the incredible rise of Tomorrowland, the pair boast a jam-packed global tour schedule and a list of hits that emphasise their ability to churn out hit after hit including the most recent collaboration with David Guetta and Kiiara on ‘Complicated’ – a track that has amassed over 65 million streams on Spotify and 45 million YouTube views to date.

The jewel in Ibiza’s party crown, Ushuaïa’s dedication to bringing the most sought after names to their world-famous stage ensures they remain one step ahead of the game every time. Renowned around the world for their legendary poolside parties, year after year the team behind the no 1 open air clubs raises the bar ever higher, with an impeccable lineup of superstar residents from across the electronic music spectrum playing from daytime to midnight. Not just content with packing their nights full of world class artists, Ushuaïa constantly outdoes itself when it comes to phenomenal productions, with a different theme each night of the week. With incredible pyrotechnics, mind-blowing lighting, visuals and a state of the art soundsystem, not to mention the beautifully designed gogo costumes, as well as an abundance of confetti, streamers and CO2, it’s no surprise people flock from around the world for the inimitable Ushuaïa experience.