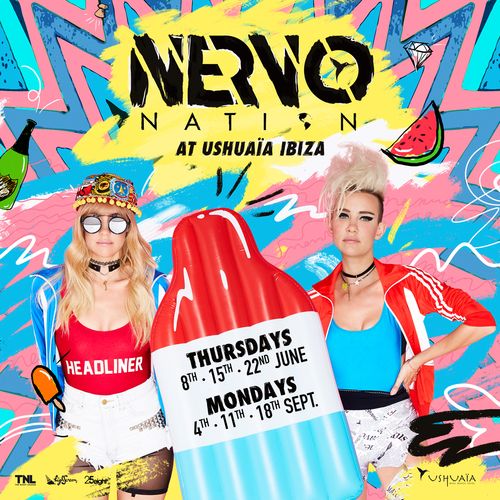 Renowned for bringing the world’s best artists to party their dazzling poolside stage, Ushuaïa Ibiza Beach Hotel have just confirmed another huge collaboration with NERVO Nation for the summer.

The highest ranking female DJs in the world, Aussie duo NERVO will be landing on Ibiza’s golden shores to take over the DJ booth at Ushuaïa for six shows in June and September. Opening and closing out the summer with their awesome NERVO Nation party concept, the sensational duo are set to prove why no season in Ibiza would be complete without them on board!

A production force to be reckoned with, Mim and Liv – best known as NERVO – have written and produced for pop royalty Kylie Minogue, Britney Spears, The Pussycat Dolls and Miley Cyrus and even earned themselves a Grammy for their part in co-writing smash hit ‘When Love Takes Over’ for David Guetta and Kelly Rowland. Aside from their obvious production prowess, in 2016 the sisters played over 200 shows to over 1.5 million fans globally and held down residencies at Hakkasan, Omnia and Wet Republic in Vegas, and of course Ushuaïa in Ibiza. Their monthly radio show NERVO Nation has been syndicated to over 70 international stations including Sirius XM’s BPM, with their raucous parties by the same name seeing them amass yet more legions of fans worldwide.

Ushuaïa Ibiza has long since been regarded as one of the most iconic clubs on the white isle and it’s not hard to see why. Their stacked lineup of top tier artist talents is just one element of their widespread international appeal. Known for their impeccable poolside productions, cutting edge stage design meets state of the art lighting, visuals and pyrotechnics under a blanket of stars, to make the open air venue the go-to destination for clubbers around the globe.