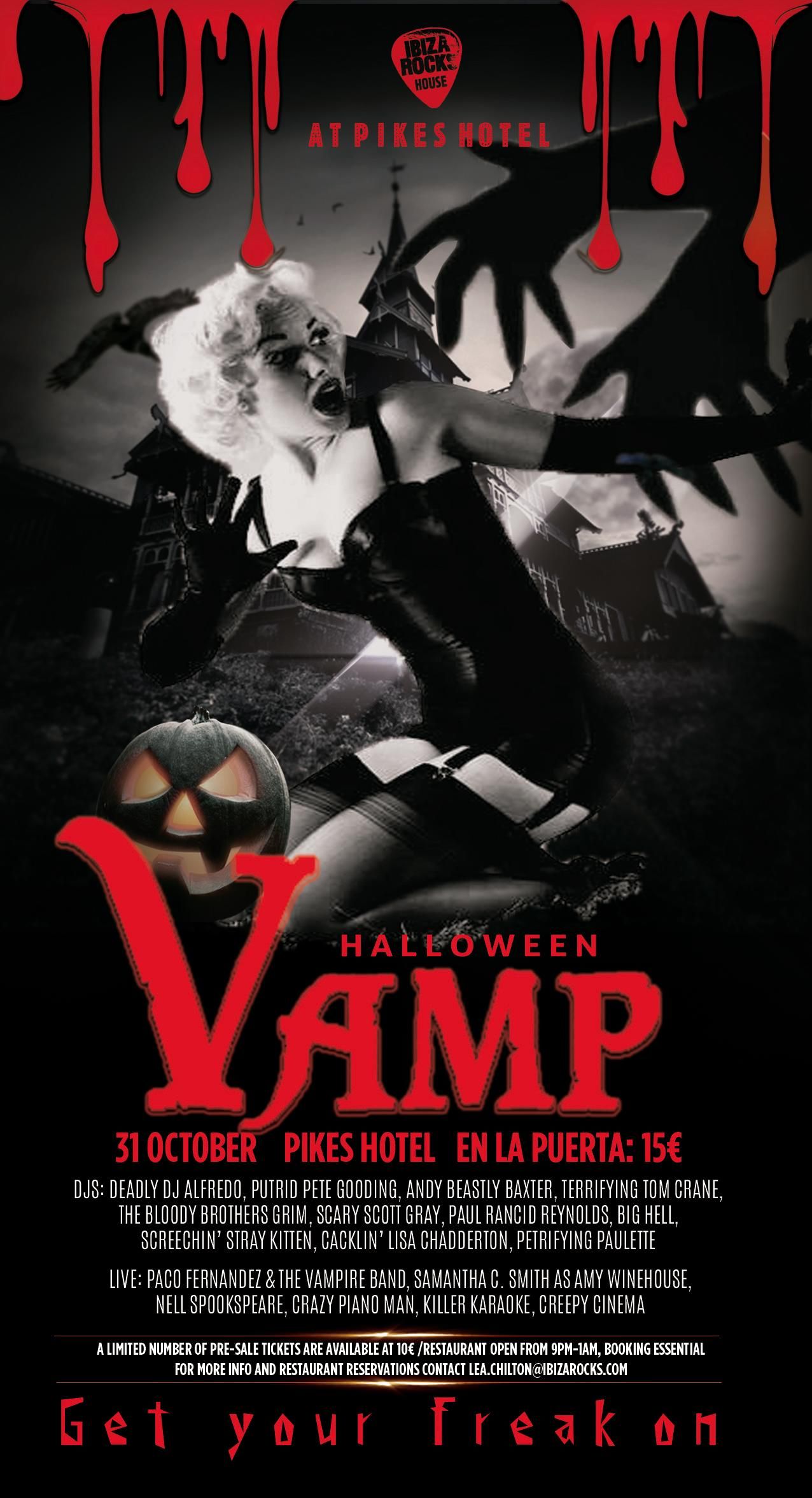 A veritable Vampire Weekend lies ahead with only days to go until the 4th edition of the island’s Halloween hooley, VAMP, takes over Ibiza Rocks House at Pikes Hotel. It’s all systems up on the haunted hill with the petrifying preparations at San Antonio’s legendary location in full swing ahead of the annual event set to take place on Saturday 31st October from 9pm.

With a line up of DJs and live entertainment that includes the very founder of the Balearic sound, DJ Alfredo, plus Flamenco hero, Paco Fernandez, not to mention a long list of Ibiza’s finest DJs and musicians, this is one Halloween party that promises a night of bloody beats and very naughty treats.

Starting at 9pm, the freaky festivities will be spread across several rooms of the hotel, with enough music and entertainment to satisfy even the most hungry of vampires. Leading this year’s DJ Army of Darkness, DJ Alfredo will be joined by Jaime Fiorito, Andy Baxter, Tom Crane, Pete Gooding, The Brothers Grim, Scott Gray and Paul Reynolds (Melon Bomb), Stray Kitten and, of course, the Ibiza Rocks House summer residents 2015, Lisa Chadderton and DJ Paulette.

Paco Fernandez and his vampire band will take over the Plaza early bells, whilst inside the haunted house, the sultry sound of Samantha Carrie Smith as Amy Winehouse will fill the air from midnight. Meanwhile, in Chez Fez, Charlie Starr will be rocking out some Halloween classics to help get your freak on.On top of that, guests are invited to get their best screeches ready for Sunny’s Killer Karaoke. Partygoers should also be prepared to have their ivories tickled by Crazy Piano Man, Roberto Campoli, on the putrid Pikes Piano accompanied by one of the island’s favourite vocalists, Nell Shakespeare.

For those who have an appetite for more than just blood and guts, Pikes Restaurant, Room 39, will be open from 9pm serving up a BBQ feast at 15euros fit for any fiend. Places are limited and it’s first come, first serve in the food department.

With special effects and classic horror cinema added to the proceedings by Aladdin Lights, this edition of the Halloween celebration aims to scare the living beejeezus out of the attendees, the stuff of actual nightmares.

On such an occasion, it goes without saying, though we will say it anyway, that appropriate fancy dress attire is absolutely obligatory. The supernatural spectrum is your oyster and prizes will be awarded for Best Costume. For those less confident about your dressing up abilities, The Minx Effect will be in the house from 7pm until late with their make-up team as well as a selection of costumes. For appointments for your monster makeover, contact Jo on 634694659.  From vampire to zombie, werewolf to witch and a whole lot more, it’s sure to be a colourful if somewhat scary affair at Ibiza Rocks House this Saturday.

In the four short years that the organisers of VAMP have hosted the Halloween celebration at the legendary rock n roll hotel, it has already been named in the Top 5 Best Parties in the World for the celebration of all things eerie, scary and downright dark.

At this stage, with the countdown well and truly on, potential party goers are advised that tickets should be bought in advance to guarantee entry. Priced at 15€, they can be bought every day this week at the hotel premises from 11am until 7pm.