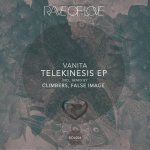 The Rave Of Love imprint returns late February with a new EP from Swiss producer Vanita, entitled ‘Telekinesis’ and backed with Climbers and False Image remixes.

Zurich based label Rave Of Love was launched in 2014 by Samuel Carangelo and here we see it marks its sixth release with returning artist Vanita, a Swiss producer and DJ with Italian roots who’s grabbed the attention of Switzerland’s Hive Club and Berlin’s Watergate in recent times with her rough and ready house style. Since its inception Rave Of Love has picked up support from tastemakers in the scene such as Mr.G, Pezzner, Alland Byallo, Okain and Eddie Richards.

Title cut ‘Telekinesis’ kicks off the release and sees Vanita employ brooding pads to instil a moody atmosphere to the composition, while crunchy drums and stab led bass sequences drive the groove alongside hooky vocal lines.

Climbers offer up their take on ‘Telekinesis’ next, taking things in a more melodic direction with dreamy arpeggio’s, sweeping synth tones and intricate processing, while False Image aka Tom Clark and Noah Pred provide a rugged dubbed out interpretation to follow.

Finally to round things off we have ‘Lost In A Moment’ from Vanita, shaping things up nicely with a deeper cut fuelled by bumpy rhythms, evolving pad lines and murmuring vocals.