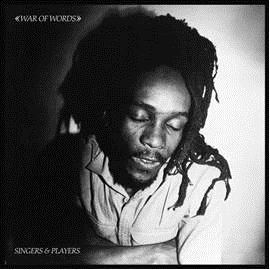 Originally released on legendary imprint 99 Records in 1981, War Of Words is the classic debut album by Singers & Players, a loose collective featuring top Jamaican deejays Prince Far I and Jah Woosh, plus members of the Arabs and Roots Radics. The mic is dominated by the sweet vocals of cover star Bim Sherman and production duties come courtesy of On-U main-man Adrian Sherwood.

Whilst very much based on a dub reggae blueprint, the record also features Keith Levene from Public Image Limited and The Clash on guitar and Ari Up from The Slits on backing vocals. This is Kingston sound system culture as viewed through the prism of the London post-punk squat scene, and championed by the quintessential downtown NYC no wave record label.

The track Reaching The Bad Man was a highlight of the recent compilation Sherwood At The Controls Volume One: 1979 – 1984, and is very much a product of that era of Adrian Sherwood’s leftfield experiments with the possibilities of dub.

Following the release of War Of Words is a 10” vinyl EP of unreleased tracks from the War Of Words studio sessions called War Of Version EP, which is out in October. Calling Over The Distant Sea has a previously unheard vocal by Prince Far I cut on the classic Kunta Kinte rhythm. Masterful Adrian Sherwood dub versions of War Of Words tracks Devious Woman (Devious Dub) and Reaching The Bad Man (Bad Man Dub) follow, before winding up with a great unheard deejay cut by Jah Woosh called Don’t Be Greedy. This is another archival release in the long-running On-U disco plate series, following on from the very popular Record Store Day 10”, An On-U Journey Through Time & Space (4 sci-fi themed dubs from the vaults).

The album and 10” were re-mastered and re-cut at dubplates & mastering in Berlin for maximum bass pressure.