Dimitri Vegas & Like Mike ft. Wiz Khalifa - When I Grow Up 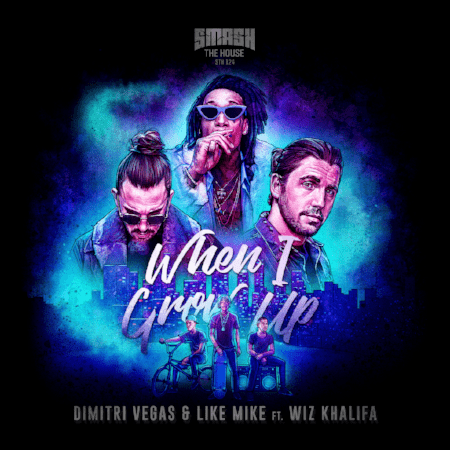 Dimitri Vegas & Like Mike ft. Wiz Khalifa - When I Grow Up

Hip-hop galáctico Wiz Khalifa and electronic music’s biggest DJ duo Dimitri Vegas & Like Mike have aligned for the fascinatingly low-slung collaboration ‘When I Grow Up’ that ignited the mainstage crowd at EDC Las Vegas last month on its world premiere – and is undoubtedly set to have fans worldwide in a rapture this summer!

Wiz Khalifa is a man who has been scaling the highest of highs for a long-time. A premium showbiz star with all the talent to back up his status as one of hip-hop’s finest artist of this current generation. From Pittsburgh to international stardom, Wiz Khalifa has bona fide musical footnotes with platinum selling albums Rolling Papers, O.N.I.F.C. and more recently the US #1 album Blacc Hollywood (certified gold). His single ‘See You Again’ featuring singer Charlie Puth currently has over 3.5 billion views on YouTube, making one of the most viewed music videos of all time.

Wiz Khalifa talking about the collaboration: “It was super dope that Dimitri & Mike thought of me for this record. Performing it with them live at EDC Vegas really made it come to life for me as well. Very excited for the rest of the world to hear this!”

Belgium brothers Dimitri Vegas & Like Mike have trail blazed their way through the electronic landscape in the last few years. From remixing A-list stars like Coldplay and Lady Gaga to collaborating with renowned artists such as Gucci Mane, Snoop Dogg, Hans Zimmer, Martin Garrix and Steve Aoki, the duo are no strangers to global success with their music. Recent releases like the anthemic collaboration ‘Hey Baby’ with Diplo, which has received a staggering 64 million Spotify streams, to their Ne-Yo collaboration ‘Higher Place’, which peaked at #1 in Billboard’s Dance Chart and spent 10 weeks atop the chart in their native Belgium, all demonstrate the growing fan-support for their studio output. A statement further backed up by the 91+ million Spotify streams that their 2017 David Guetta and Kiiara collaboration ‘Complicated’ has so far received.

Giving insight into why working with Wiz Khalifa was a dream project, Dimitri Vegas & Like Mike said: “Our passion for constantly evolving our sound is as strong as the music we love and the artists we respect. Wiz Khalifa is up there for us as one of the modern rappers doing his own thing and defining a new era in hip-hop history. We grew up on that scene and it’s been an influence in our sound since the begin, so teaming up with Wiz has been an idea of ours for some years now. Glad we could finally make it happen and share it with you guys!”

Whilst collaborations fusing hip-hop and electronic stars always comes with raised expectations. The impact of this trio’s musical artistry on ‘When I Grow Up’, with the records distinctive flavors and groove, is a demonstration of the trio’s nonpareil ability to craft a record that has mainstream draw through its rhythms and crossover production appeal. Signifying the potential for another international radio hit!
‘When I Grow Up’ is available via Ministry of Sound today!