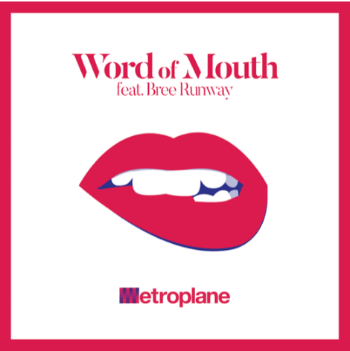 Metroplane deliver their fresh single ‘Word of Mouth’, an uptempo and rhythmic release set to arrive onDanny Howard’s Nothing Else Matters label.

Dropping today, the track focuses on a hypnotic bassline and pop-dance synths, with a strong vocal written by Becky Hill (best known for her UK #1 ‘Gecko (Overdrive)’ with Oliver Heldens) and delivered by the rich and silky voice of Bree Runway; the fierce Londoner, who having toured with Years & Years,is best known for single ‘What Do I Tell My Friends.’

Coming together under the ‘Metroplane’ moniker, Aeroplane and Alex Metric first performed together in Asia, and thanks to huge crowd reaction, have since played b2b in London, Paris, and Istanbul and Set Out Festival in Kokomo Beach, Turkey.

“We were on a cruise and played back-to-back for three hours” the duo explain. “And after that, we figured we should make a record together, which went amazingly well too… So we are going to make some more!”

Following the release of their debut EP, Metroplane have already garnered thousands of streams on Soundcloud and gained quick acclaim among fans, radio, and fellow DJ’s alike. Their tracks – “Mr. E”and “Over Me” have gained support from BBC Radio 1 triple threat Annie Mac, Pete Tong, and Danny Howard; with the latter signing ‘Word of Mouth’ to his Nothing Else Matters label.

Founded in 2015, Nothing Else Matters was launched with the aim of giving opportunities to promising, up-and-coming talents from the world of dance music, with Danny stating: “Everyday I’m discovering new tracks and extremely talented artists. Aside from supporting them on air and on the dancefloor, I’ve always wanted a way to help even more people hear these incredible sounds.”