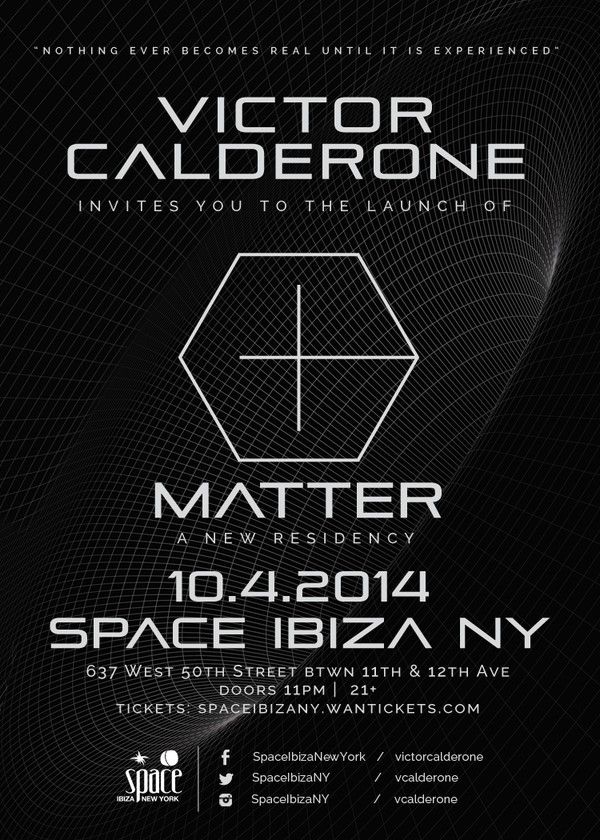 New York City nightlife veteran Victor Calderone gets ready to embark on NYC’s next chapter in clubbing history with his new residency night ΜΛΤΤΕR + at Space Ibiza NY launching October 4. Victor will bring back his signature marathon DJ sets that became NYC dancefloor legend. The ΜΛΤΤΕR + nights will bring together the synergy of the DJ and the dancefloor, uniting the mind and body, creating the energy and momentum for the ultimate clubbing experience.

The legendary Ibiza nightclub and entertainment brand, Space Ibiza, opened its much anticipated New York City branch, Space Ibiza NY in Hells Kitchen with over 20,000 square feet of clubbing space, including a roof deck with city views, one of a kind performances, a state of the art, custom imported Funktion One sound system. The ΜΛΤΤΕR + nights to be held in the multi-level main room featuring floor to ceiling windows will be a cornerstone of the Saturday night monthly programming. They will be a monthly journey for both nightlife connoisseurs and those just now discovering the mature sounds of techno and house music that will extend into early morning Sunday sessions.

Victor Calderone’s extraordinary 20-year career as a multi-talented master of musical manipulation extends beyond the DJ booth to past collaborations with some of the biggest names in pop like Madonna, Sting and Beyoncé Knowles, to more recent collaborations with the likes of Adam Beyer, Richie Hawtin, Nicole Moudaber and Paco Osuna. Victor’s constantly evolving approach and contributions to the worlds of house, techno and tribal music has earned him a place firmly at the top among the world’s most prolific DJs and producers. This Brooklyn native has long been a stalwart of the ever-changing landscape of NYC nightlife with long-running residencies at Roxy, Crobar, and Pacha NYC and has also expanded his musical reach to Miami, LA, Montreal, Ibiza, Bulgaria and beyond.

Few DJs or producers have achieved the level of success that Victor has accomplished during his storied career. With the launch of this new residency, Victor maintains a stronghold on clubbing culture and with newfound energy and inspiration, he returns to the studio to work on a new artist album due for release in 2015.