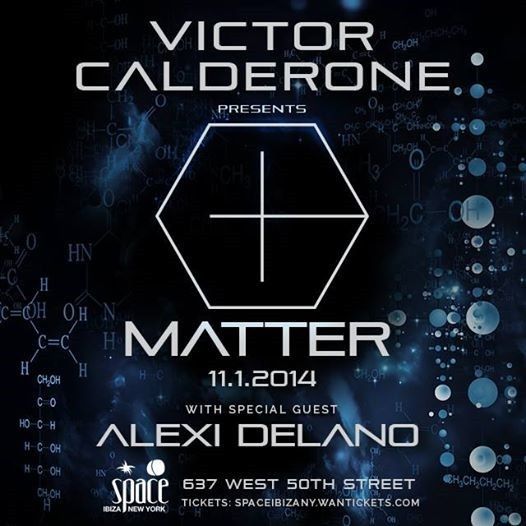 Victor Calderone’s new residency is bringing New York City nightlife back. Following the successful launch of his M?TTER + residency in October, Victor Calderone and Space Ibiza NY are excited to announce the highly anticipated second installment. On November 1 the journey continues as Victor keeps the crowd moving from Saturday night until Sunday morning at the newest nightlife destination in the city that never sleeps.

The M?TTER + residency launch party in early October garnered much attention from press and club-goers alike. Known for his signature marathon sets, New York native Victor Calderone laid down an unforgettable 7-hour set that lasted until the sun greeted revelers through Space Ibiza NY’s floor to ceiling peek-a-boo shutters the next morning.

Victor Calderone’s 20-year career has seen numerous residencies around the world, as the Village Voice states,”Calderone, one of the city’s true superstar DJs, has enjoyed residencies at nearly every big-room club in town. And he has been fielding other offers. But this time, it clicked.” He has teamed up with the legendary Ibiza nightclub and entertainment brand to leave his mark on the Big Apple’s newest after hours spot, Space Ibiza NY. The second installment of Victor’s M?TTER + residency will prove just how Victor Calderone remains at the forefront of the techno and house scene, showing no signs of slowing down. Fans won’t want to miss this.

The legendary Ibiza nightclub and entertainment brand, Space Ibiza, opened its much anticipated New York City branch, Space Ibiza NY in Hells Kitchen in September 2014 with over 20,000 square feet of clubbing space, including a roof deck with city views, one of a kind performances, a state of the art, custom imported Funktion One sound system. The ?????R + nights to be held in the multi-level main room featuring floor to ceiling windows will be a cornerstone of the Saturday night monthly programming. They will be a monthly journey for both nightlife connoisseurs and those just now discovering the mature sounds of techno and house music that will extend into early morning Sunday sessions.