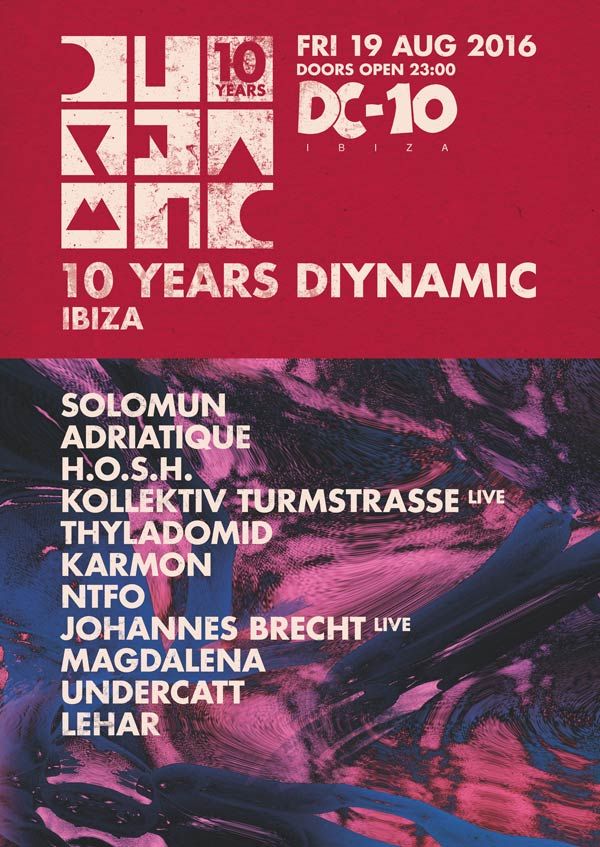 A little over five weeks is left until Diynamic brings its 10-Year anniversary celebration to DC10 Ibiza, with presale tickets now on sale. Friday, August 19th will be the only chance this year to see almost the entire Diynamic family united at one party on the island. Experience sets by Solomun, Adriatique, H.O.S.H., Kollektiv Turmstrasse, Karmon, NTFO, Johannes Brecht, Magdalena, Undercatt and Lehar all in one night.

After the ecstatic 30+ hour long kick-off party in Berlin in April, Diynamic is getting ready for the next anniversary event in line: 10 Years Diynamic in Ibiza. When you think of the long history the label has with the electronic music Mecca, the choice to hold one of these special events on the White Isle was obvious. Many wild club nights, sunny outdoor events, and dances on the beach come to mind when reminiscing.

For 10 years now Diynamic – the artist collective surrounding label father Solomun – acts true to this calling. Since 2006 it’s all about releasing, partying, thinking ahead and doing it yourself. Born in the heart of Hamburg’s St. Pauli neighbourhood, now home in virtually every corner of the world.

Many of the label’s artist have played separately at DC 10, but on Friday, August 19th Diynamic will hold its first ever label event there. Starting at 23:00 until the morning comes, Diynamic’s artists will play the main room and the terrace.

What started in Berlin and now continues on Ibiza, will also come to Zurich, Amsterdam, London, Paris and Diynamic home town Hamburg – a city taken over by Diynamic and its artists for an extended night each.