11 things to do at Sziget Festival 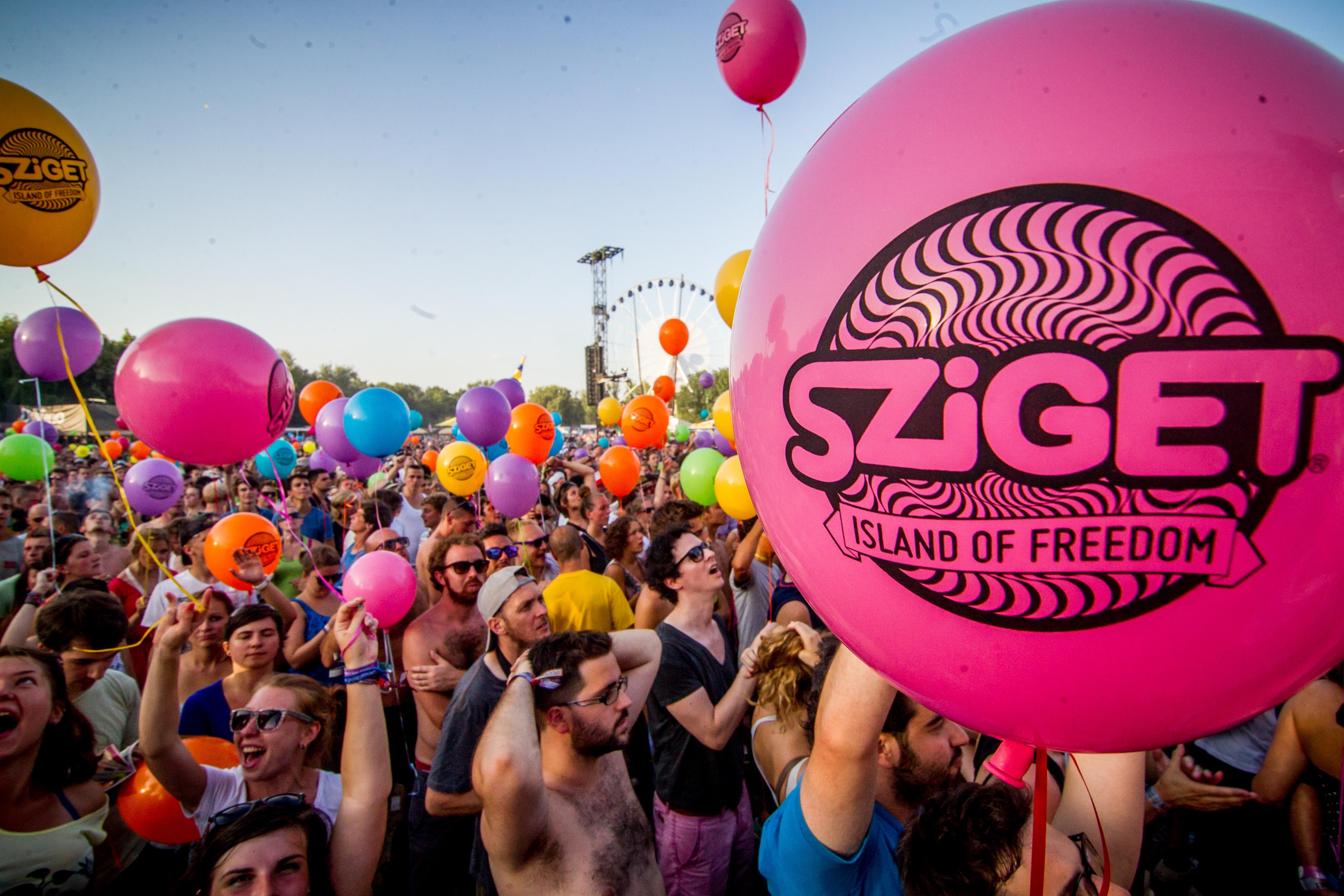 11 things to do at Sziget Festival

Sziget is the Island of Freedom and also the winner of the ‘Best European Festival Line-up Award’ in 2015. To live up to its traditions, the festival continues to build its identity offering a diverse and open-minded program, making sure that it is much more than ‘just’ a music festival.

This unique atmosphere has been the essential part of Sziget from the beginning, merging a diverse music line-up with many programs beyond music as theatre, dance, circus and many more. This is all topped with quality services, exciting visuals and spectacular installations. These are the guarantees of success on a very packed festival market.

Here’s 11 things to experience while at Sziget….

1.Art
When it comes to the visual landscape of Sziget, Gerendai added, that Sziget received more than 200 applications to its Art of Freedom tender this year. These ideas and concepts arrived from designers, sculptors, artists or just enthusiastic "amateurs" from all over the world. Out of all applications almost 100 will come to life in any corner of the island. These gigantic installations and peculiar lights bring one, very important aspect to the previously mentioned special Sziget atmosphere, so all day, visitors can wander to one of the 50 venues through many worlds.

In the ArtZone, Szitizens will have the opportunity to try out different art forms and to create arts and crafts. In the main focus we can find re-cycled materials and with the help of the most prominent artistic groups there will be several opportunities to be creative. This year the Architects of Air are arriving with Trilumin-Luminarium. A Luminarium is an 800 square meter inflatable sculpture made up of labyrinthine tunnels and inspiring spacious domes – a sensual world of liquid-light and color. The interactive and community art project of the Before I Die encourages people to share their personal desires, secrets and fears in one common space. The giant board of Candy Chang will await Szitizens to leave those they would like to see/feel/experience before they die.

2.Cirque Du Sziget
The Cirque du Sziget will bring unique and spectacular productions once again, where great international new-circus companies will arrive and entertain the crowd. The German More Promotions will bring their production called 'Soap', a sexy, funny and dangerous show combined with as much water as possible!

From Australia, the company of Circa will bring their production called 'Beyond' . a warm, surreal and unexpectedly moving. Blending dynamic circus acts like trapeze and Chinese pole with cheeky feats of strength and multiple bunny heads, set to a bewitching mix of show tunes, ballads and electronica, this creation delights and enchants.

The Québec Circus School from Canada is bringing their show 'La Souche', which is a progression of each of their own artistic developments with the influence of the others, the relationship of people who love circus, and young adults coming together.

Also from Canada, Les Dudes will perform 'Let's do this!' . Juggling is easy – anyone can learn it with a little practice… perhaps even juggling on someone else's shoulders. But when fire and unicycle are added to the mix, the result will either be a disaster or a success. The Canadian duo Les Dudes will show us which.

'Miss Dolly' is the performance of the French company of Marcel et ses drôles de femmes. The performance of Miss Dolly of aerial and Korean cradles played outside features 4 dusty characters coming from who knows where and start investigating the scene. This spectacular circus production will merge sensuality, beautiful and awful elements as well as apples, humor, absurdity, acrobats and the power of the wind.

The Hungarian Circus Institute will be also present at the venue with the performance called 'The Ball', performed together with the students of the Québec Circus School, and the Hungarian company Recirquel will return to Sziget with their performance 'Paris De Nuit'.

3.Theatre and Dance
The Theatre and Dance Tent will host once again the most exciting contemporary theatre and dance companies at two venues: in the tent itself and also on an outdoor stage. Outside we can meet the youngest generation of contemporary dance both from Hungary and all over the world. From Hungary we can meet Milán Újvári, Adél Juhász and Áron Porteleki, Viktor Szeri and Júlia Vavra as well as Body Lotion, formation of Virág Arany and Júlia Lányi. József Trefeli and Gábor Varga will bring their production called 'Jinx 103'. From the international scene we can see three performances on the outdoor stage: Maastheater from Rotterdam bringing 'Twins' and'Play it Back'. From Israel arrives Roni Chadash and Etay Axelros and Chiaki Horita. In addition, Turkish Ziya Azazi comes back to Sziget with the performance called 'Ember' . In the tent there will be performances twice a day, so Szitizens can check out the world famous Hiroaki Umeda with the so called 'Fluid Intelligence'. The Japanese choreographer is working with five Hungarian dancers this year on this play that will have its debut at Sziget. Important to mention the other companies as E.sperimenti Dance Company, the National Dance Company of Wales, the Kibbutz Contemporary Dance Company, Dani Pannullo Dancetheatre Company and Cortez-Fontán.

The French Transe Express will be this year's Giant Street Theatre company at Sziget, who will bring their newest production called 'Mù', which will invite the Szitizens to the wonderful world of Jules Verne, where we can follow the members of the company from the depth of the seas through fire and air straight to the Moon. This is a very spectacular and amazing production that will definitely enchant the viewers!

4.Sziget Beach
The Sziget Beach is one of the most popular venues, as it is the place to be if one wants to enjoy the sun and chill in the Danube. This year Sziget Beach will be teamed up again with the Cökxpôn Chill Garden, where the only thing to do is "chill". The venue of the Classical, Opera and Jazz Stage will host Gabriel Prokofiev, who is the grandson of the famous musician. At the venue Szitizens can not only enjoy contemporary opera, but can also interact with the artists when it comes to conducting or composing. Fans of jazz should also migrate here as great concerts and programs will await them.

5.Travelling Funfair
The venue of the Travelling Funfair "Vándor Vurstli" will bring a unique atmosphere, a magical world to Sziget, where everything is possible and we can all turn back time. There will be a lot of shooting, tossing and striking game-structures all with some fanfare music! This time Szitizens can also enjoy the Catalan Automatarium and the white caravan of the Omnivolant. The small street theatres bring life to any corner of Sziget, you don't even know where you will meet them! This year Sziget welcomes Brincadeira, Sarruga and Murmuyo.

6.Hungarikum Village
The Hungarikum Village will once again bring to Sziget the Hungarian countryside and show Szitizens what Hungarian customs, virtue, food and drinks are all about. Every year has a special theme, this time it will be the "toys and games". The fresh and dynamic venue of Sziget, the Afo-Latin-Reggae Village will be very colorful again! Every day special workshops, dance and drum lessons, yoga classes, capoeira, salsa, samba, African dance and drum workshops, Northern African belly dance and Afro-Caribbean dance workshops will await the Szitizens. Straight from Senegal, the Sory Ballet Camara will bring their authentic African dance and drumshow production and also representing the South-Asian reggae scene Ras Muhamad from Indonesia will bring some nice beats.

7.Museum Quarter
The Museum Quarter is where Szitizens can meet the most important Hungarian museums in a highly interactive and fun way. However this year there is also a special guest, the Musée national de l'historie de l'immigration. The prestigious museum from Paris together with the Museum of Ethnography from Budapest will have an almost 30 meters long exhibition and interactive program series focusing on the topic of borders. This way the center of attention will be the borders and migration, where they will show migration issues starting from the fall of the Berlin Wall.

8.Magic Mirror
The Magic Mirror is the resident queer and LGBT venue of Sziget. The venue is the host of man discussions this year in English language brought to the Szitizens by Kristóf Steiner, while the movie screenings will once again feature the queer movies of the Berlinale Film Festival, where the Q&As will be hosted by Kristian Petersen. This year Dave Thompson will bring some laughter with his stand-up performances and finishing the program every day, Szitizens can enjoy the Variéte show, this time directed by Markus Pabst, who is the founder of the Base Berlin. The show will feature artists as David Pereira and Jack Woodhead.

9.Games
The I Ching Labyrinth is an interactive venue, where visitors can learn about themselves and help them to discover unknown truths with the help of the I Ching, the Chinese Book of Changes, and the 64 hexagrams. The exiting and interesting venue of GameLandHub will present the digitally controlled world around us. Besides digital games, traditional games also can be found as well as the new generation of the world’s best and latest party board games. Here Szitizens can also master their knowledge of the Rubik's Cube and play poker as well. At the venue of the Chess Tent Szitizens can start learning or strengthen their chess knowledge.

10.SportsZone
In partnership with sport associations Sziget's aim is to provide a place for Szitizens to get to know various new sport activities or just find some leisure time enjoying their favorite sports. This place is the SportsZone, where in 2016, the year of the Olympics and the UEFA European Championships Sziget is planning special activities and surprises, such as establishing a center for the Olympics with live broadcast of the events of Olympic Games.

11.Food from around the world
The gastronomy landscape of Sziget aims to be both diverse and high quality. This time even more restaurants will be present from outside Hungary. For instance FoodStock, festival kitchen of the Slovakian restaurant Fou Zoo, will also bring a nice twist to the wide variety of hamburgers, pizzas, the most exciting food trucks, Hungarian specialties and prominent kitchens from all over the world.

Sziget tickets are selling with record speed this year, so visitors do well to buy their passes as early as possible. Sziget Festival takes place in Budapest between 10-17 August. Tickets and information: www.szigetfestival.com