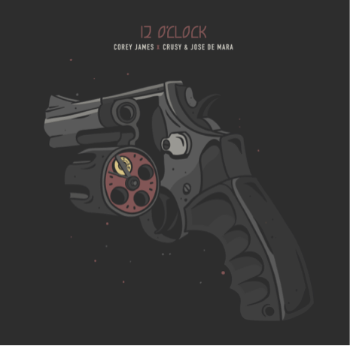 Quickly establishing a reputation as one of the most in-demand producers on the circuit, British starCorey James has unveiled his brand new track ‘12 O’ Clock,’ a groove packed anthem featuring the talents of Crusy and Jose De Mara.

Lacing the track with a deep gruff vocal and a rumbling bassline that injects real energy into the production, ‘12 O’ Clock’ embodies the signature sound of Corey’s biggest mainstage weapons, and follows his flurry of recent releases, including ‘Eros’ with Years, ‘Arlanda’ with David Pietras, and ‘Funky Music’ with highly-rated Israeli duo Teamworx.

Having supported Third Party at their Ministry of Sound showcase evening, followed by a legendary Printworks performance alongside Kryder, and his mentor, and SIZE boss, Steve Angello at the tail-end of last year, 2018 year is shaping up to be the biggest of Corey’s career so far, with the Liverpudlian producer adding:

“Watching Steve Angello perform for the first time is what motivated me to become a DJ/Producer and pursue a career in music. So I feel very honoured to be part of the label and the SIZE family.”

Featuring Crusy, fresh off the back of his SEBJAK remix ‘Look at Me’, and Arcadia Records label owner Jose De Mara, who has received support from the likes of Tiësto and David Guetta in recent times following his track ‘Bangkok’ on Kryder’s Sosumi Records, ‘12 O’ Clock’ acts as an aural embodiment of all three artist’s varying styles and looks set to inflict real damage to dancefloors worldwide upon release today.