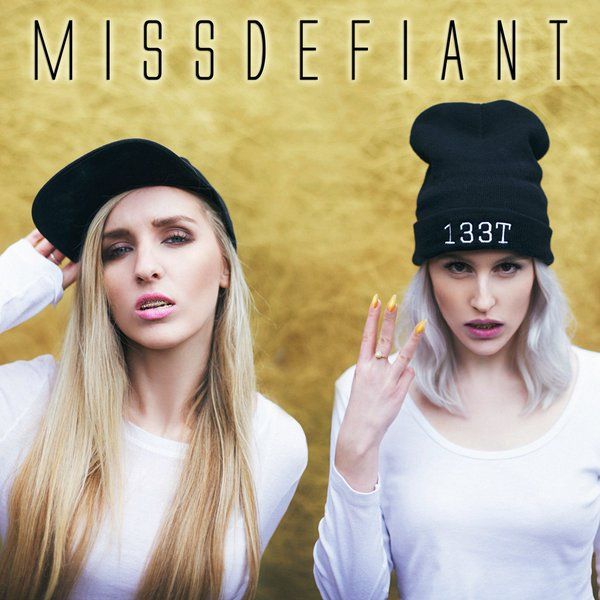 133T speaks out against a nightlife dominated by drugs with a strong anti-drugs message “I’m telling you, don’t want that stuff”. MissDefiant look at the pressure put on young people to “get in with the hype” and the glamorisation of drug culture being “irrational, passional, fashionable, international, impractical, fanatical, mechanical, supernatural.”

133T is hacker speak for elite, nodding to the status of people who “want to turn me”. The heady electro beats recreates the frenzied yet fun nature of nightlight as the girls craft the backdrop for their message. The single is the latest in an ongoing collaboration between singers Emily and Jordan and producer Mike Tournier combining a perfect blend of electro and pop. The single launch will be complimented by a remix from Humbringer and an acoustic version of the track which amplifies the message to a wider audience.

Since launching in April of 2015 MissDefiant have created an online storm around their catchy music, fun content and engaging social media posts. MissDefiant have already performed at prestigious music venues such as The O2 Academy in Islington and the Brixton Jamm. They have also recently received a social media sponsorship from MAC Cosmetics due to their growing popularity on Twitter and Instagram. The girls will be performing at The Water Rats in Kings Cross on the 19th April.

Born in Battle, East Sussex, Emily Rose Adams has had a passion for music from an early age. Trained as a classical soprano, she moved to London at the age of 16 where she met Jordan Cather. Emily has toured the UK and Europe in musical theatre and opera shows such as Carmen, Sopranos vs tenors and Aladdin. She has also had acting roles in popular TV programmes like Broadchurch, Holby City and Grantchester.

Jordan, originally from Plymouth, has danced with artists including Charli XCX and Years & Years, inspiring her to pursue a career in singing and songwriting. Jordan is currently studying music production at BIMM London, and together with Emily started to write music to release as MissDefiant. Jordan has also modelled for London Fashion Week, danced with comedians such as John Bishop and Paddy McGuinness and taught commercial dance classes at Pineapple Studios.

Mike Tournier, brings musical experience to the girls raw and electric sound, having previously helmed bands Fluke and Syntax. Fluke's first release was in 1989, with their music being featured on soundtracks to Tomb Raider and Sin City 1 and 2. When signed to Virgin, Fluke released 6 albums, performed at Glastonbury and toured with David Bowie and Prodigy. He then went on to start Syntax in 2000, signing to Sony in 2002 which made music that featured on soundtracks to The OC, Nip Tuck, Bones, Conviction, Driver 3 and the In Time trailer. His highlights of Syntax were appearing on Top of the Pops and touring with the Scissor Sisters. Mike enjoys working with Emily and Jordan who hope to emulate the success of bands that Mike has remixed in the past like the Rolling Stones, Bjork, Smashing pumpkins, New Order, Talk Talk, Frankie goes to Hollywood, Yellow and Simple Minds.