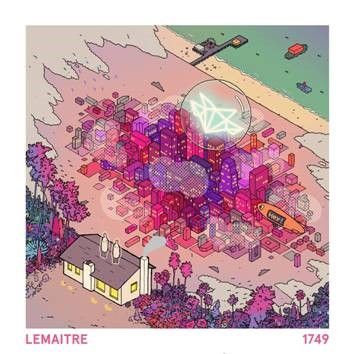 Norwegian electronic duo, Lemaitre, announce the release of their newest EP, 1749, due January 29, 2016 via Virgin EMI. A trailer for the 5-track collection can be watched below. The band is also premiering a remix for single “Closer” by Japanese artist starRo via “Follow on Spotify to Unlock” promotion. Fans can click HERE to be directed to a landing page where they can follow the band on Spotify and a stream of the remix will be unlocked to listen.  Fans can also “like” Lemaitre on Facebook from the landing page and view upcoming tour dates.

Lemaitre’s new EP, 1749, brims with pop gems sung by Ulrik Denizou Lund. “Not Too Late” and “Day Two” both have a bright ’70s-pop feel even as Lund and Ketil Jansen’s tones and beats live definitively in the post-EDM present. “Stepping Stone” is a lean groove with a sing-along chorus. They also make smart use of guest vocalist Jennie A on “Closer” and producer Giraffage on the tropical-leaning anime-videogame fantasia “Nishio 2.” 1749 is not only the title of the duo’s forthcoming EP; it’s also the address of their Los Angeles home and studio. The band says, “1749 is our home address and the title of our EP, but it’s more than that. 1749 represents the journey we’ve made and the process of creating music in our home away from home. We live with our video director, manager and our friend Sebastian "Coucheron," who also makes music. We all moved together from Norway to chase the dream of making music and living in LA.  It’s kind of like the TV-show Entourage except without all the money, ladies, and fancy parties."

Released in July, single “Closer” has been the band’s fastest growing track to date, with over eight million streams and counting. The horn-infused and synth heavy collaboration track came when Lemaitre’s manager discovered Jennie A’s album Gemini Gemini. The official video for “Closer,” which premiered on Flaunt Magazine, was directed by Johannes Greve Muskat and pays homage to the great American film director, Wes Anderson. Last month, Lemaitre debuted a “Closer” remix by Washington D.C. producer duo, Indiginis. This Song Is Sick declares “Indiginis brewed up something dreamy on this remix, placing a collection of soft future bass arrangements into the framework while adding some dazzling synths. The end result brings a whole new round of playability to the table and keeps the mood fresh for listeners to enjoy for hours.”