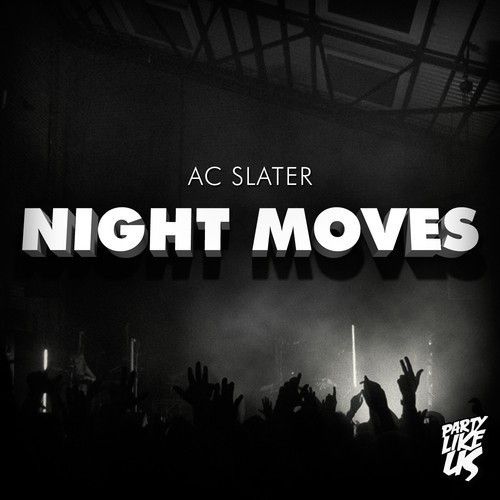 AC Slater returns to Party Like Us Records with ‘Night Moves,’ an EP of bass-heavy, dancefloor-friendly music meant for the basement parties and warehouse raves.

‘Night Moves’ kicks off with “So Sweet”, featuring the bittersweet vocals of Megan Thomas layered over a bed of spaced-out chords, building up to a plunge into a dark and heavy bassline. Next up is “Go Harder,” with its intro that grows into a half-time breakdown featuring a vocal hook by fellow Party Like Us recording artist Dell Harris, and a classic Slater big bass drop. Finishing off the EP is “What You Want”, a frantic grime/house hybrid with an eerily calm breakdown in the middle to break up the chaos between drops.

AC Slater has begun a lengthy career for himself by fusing elements of house music with the dirty basslines of UK garage and drum & bass, sprinkled with old-school rave synths and breaks, for both his crew Trouble & Bass and his own Party Like Us Records, which continues to release some of the most groundbreaking and forward-thinking dance music in the underground. AC has collaborated with influential underground artists such as Nina Sky all the way to chart toppers like Far East Movement, and has done official remixes for the likes of Big Sean, Moby, Robin S. and many more, as well as toured the globe several times, with tunes and guest mixes that can regularly be heard on major radio stations across the world.

‘Night Moves’ is out now on Party Like Us Records and available on iTunes, Beatport and at all major online music retailers.