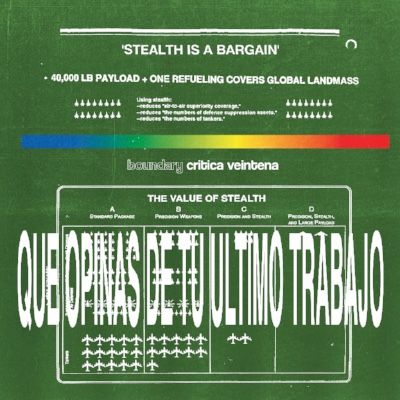 Following the release of ‘Confirmado Por Aquellos’ this summer,  Boundary returns to Point Records with ‘Aerodynamics of Multimedia’ – a 5-track production which will be released on the 7th December.The lead single ‘Critica Veintena’ is out now with a music video to follow shortly.

Launching the EP, ‘Critica Veintena’ utilises 90’s style synth stabs whilst maintaining rhythmic and disco-inspired elements and displays the Dominican artist’s sonic diversity.  The rest of the collection sees melancholic tones of tracks like ‘Amelodic’ and ‘SinTitulo3’ and brooding cosmic glitches in ‘Letra 4 Numero 1’. In the latter part, the broken melodies of ‘33 Posibles Encuentros’ and ‘Aerodynamics Of Mutlimedia’ highlight Boundary’s experimental side with influences of IDM.

"Aerodynamics of Multimedia is the second to last release of the RGB series, produced during 2017 and 2018,” added Boundary. “These songs were made during a period of a lot of personal change where I wasn't sure what was happening and everything felt like a branch that kept extending itself without my input. I wanted to express that in these songs so none of them have anything constant and are full of changes and irregularities while still keeping harmony and balance throughout.

Inspired by a sumptuous blend of genres, including acid house and soulful tones, Boundary continues to amass worldwide plaudits on account of his unique signature style and powerful production prowess. With already key support from the likes of Resident Advisor, Mixmag and XLR8R as well as radio tastemark NTS, ‘Aerodynamics of Multimedia’ underlines the artist’ ever-expanding potential, and it set for release on 7th December, with ‘Critica Veintena’ out now.