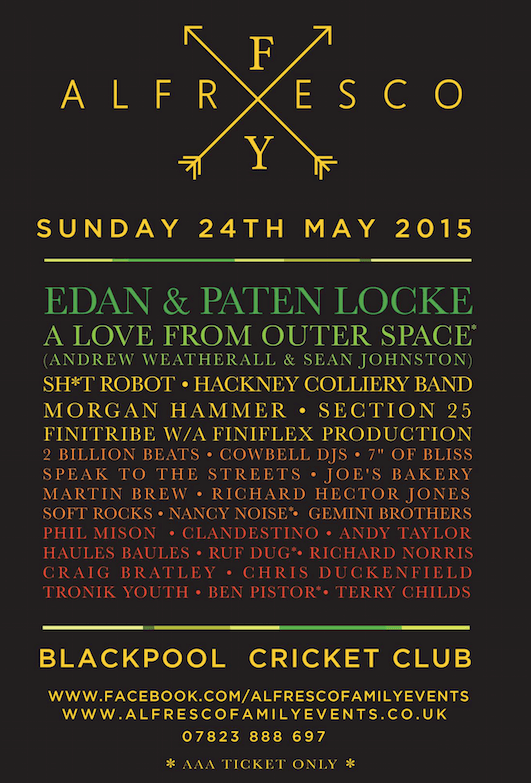 Not long now until Alfresco boutique festival takes to the seaside on Sunday 24th May.  The line up is the most experimental Blackpool as ever seen, with an array of live international acts and DJs, street artists and family entertainment for the kids.   Alfresco focus on introducing cutting edge talent, you would normally expect to see at the bigger and established festivals in the bigger cities, not Blackpool! Their attention to detail is second to none, and they make it their mission to pamper everyone’s needs, including the little people. All family entertainment and crafts are free throughout the day, and covered by one small ticket cost.

Alfresco presents the fifth year by hosting four enclosed stages, housed in and around the infamous 120 year old Cricket club, situated in the grounds of national award winning Stanley Park.

The focus is always the music and they have certainly ticked all the boxes with this year’s eclectic line up.

Blackpool’s legendary darlings Section 25 take time out from their busy tour to inject some post punk glamour and energy.

East London’s favourite 9 strong horn section: The Hackney Colliery Band, who closed London’s Olympic ceremony and have worked with the likes of Amy Winehouse, will guarantee to impress with nuggets of funk, ska, jazz, balkan beats.

Scotland’s Finitribe with Finiflex production make a huge come back this year with new material and rereleases of 101, mixes out soon on Record Store Day, prepare to be impressed with their groundbreaking light show.

Morgan Hammer jets in from Spain to take us on a journey of post-punk, new and minimal wave, 80’s tunes, nu-disco…

and not forgetting 24 other DJs who will be showcasing the best underground music from different stages throughout the day and night including: Tronik Youth from Nein Records, Gemini Brothers, and Chris Duckenfield.

Chug pioneers Andrew Weatherall and Sean Johnston’s A Love From Outer Space end the Alfresco one day festival with style until the early hours.