All Points East 2019 > The Strokes announced as latest headliner 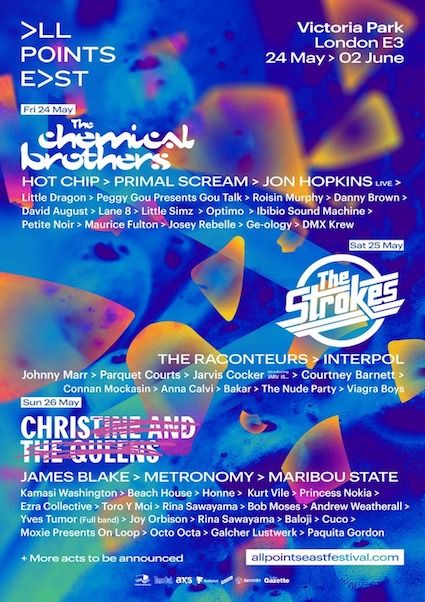 All Points East 2019 > The Strokes announced as latest headliner

All Points East returns for a stellar second year to Tower Hamlet’s Victoria Park, following a sold-out 2018 debut that established a new and essential music event in central London. Today, All Points East is excited to announce the full line up for weekend one – an unmissable three days at Victoria Park showcasing the world’s finest alternative acts.

Following on from the previously announced headliners – The Chemical Brothers (Friday 24th May), Bon Iver (Sunday 2nd June), Christine and The Queens (Sunday 26 May) and Bring Me The Horizon (Friday 31st May) – All Points East can reveal the latest headliner joining the bill is the iconic New York rockers The Strokes, who will perform on Saturday 25th May 2019 – the band’s first performance in the UK for 4 years.

Also announced are further special guests making up the opening weekend’s stellar line up. From the experimental sounds of James Blake, Jon Hopkins (Live) and Róisín Murphy to the most in-demand DJs such as Peggy Gou, Moxie and Andrew Weatherall – plus of course the outstanding headliners inThe Chemical Brothers, The Strokes and Christine and The Queens – All Points East has once again positioned itself as one of London’s finest festivals.

Few bands since the turn of the 21st century have been so influential and illustrious as The Strokes, a group whose 2001 debut album Is This It still remains one of music’s most celebrated long players – featuring at the top of countless publications’ lists of best albums of all time.

The group’s subsequent four LPs (Room On Fire, First Impressions Of Earth, Angles, Comedown Machine) and headline shows across the globe has seen their profile continue to rise – also buoyed by their respective individual projects and collaborations – with lead singer Julian Casablancas even linking up with French electronic pioneers Daft Punk on their UK #1 album, Random Access Memories.

It has been the UK who has arguably most embraced The Strokes and their music throughout the years, making their ‘homecoming’ performance at Victoria Park all the more special and anticipated.

The Raconteurs made their long overdue return in December with two new singles – “Sunday Driver” and “Now That You’re Gone” – both highlighting why the band’s past work is held in such high regard. Now they are set to make their first UK performance since 2008 at All Points East, with their forthcoming album sure to be showcased. The group’s frontman Jack White also has a strong connection to The Strokes, even joining them onstage in 2002 for a special performance of The Strokes’ classic hit  “New York City Cops” – a moment that has gone down in rock folklore. Here’s hoping for a repeat at Victoria Park…

Like headliners The Strokes, Interpol are another iconic New York band that emerged from the post punk revival of the 2000s. The group, spearheaded by Paul Banks, recently released Marauder, their first album in 4 years – and expect to hear singles such as “Number 10” and “The Rover” alongside hits from their extensive back-catalogue.

Also performing is Johnny Marr – best known from The Smiths fame and is considered one of Britain’s finest ever guitarists, Rough Trade signees Parquet Courts, who are no doubt one of many bands that take inspiration from headliners The Strokes, English musician, actor, presenter and former Pulp frontman Jarvis Cocker and the ever-eccentric and prolific Connan Mockasin.

They’re joined by Anna Calvi – whose 2018 album Hunter was one of the year’s most celebrated releases – Bakar, dubbed “the next-gen rockstar” by i-D and counts fans in the likes of Skepta and Elton John, rising psych-rock bandThe Nude Party and unapologetic punk outfit Viagra Boys – who left their mark in 2018 via their excellent debut release, Street Worms.

All Points East is also excited to announce further names to the opening weekend’s bill.

East London’s beautiful Victoria Park in Tower Hamlets also hosted a hugely popular 4-day community focused midweek event last year. Kicking off on the second Bank Holiday Monday, In The Neighbourhood is set to return across the half term week for 2019. Featuring free access to the All Points East site, In The Neighbourhood will host a vibrant programme of activities and entertainment, in collaboration with the local community, businesses, organisations and suppliers. From free Outdoor Cinema, Live Music and Entertainment, Street Food to Pop Up Bars, Theatre, Arts, Sports & Wellbeing, Children's Activities and much more.