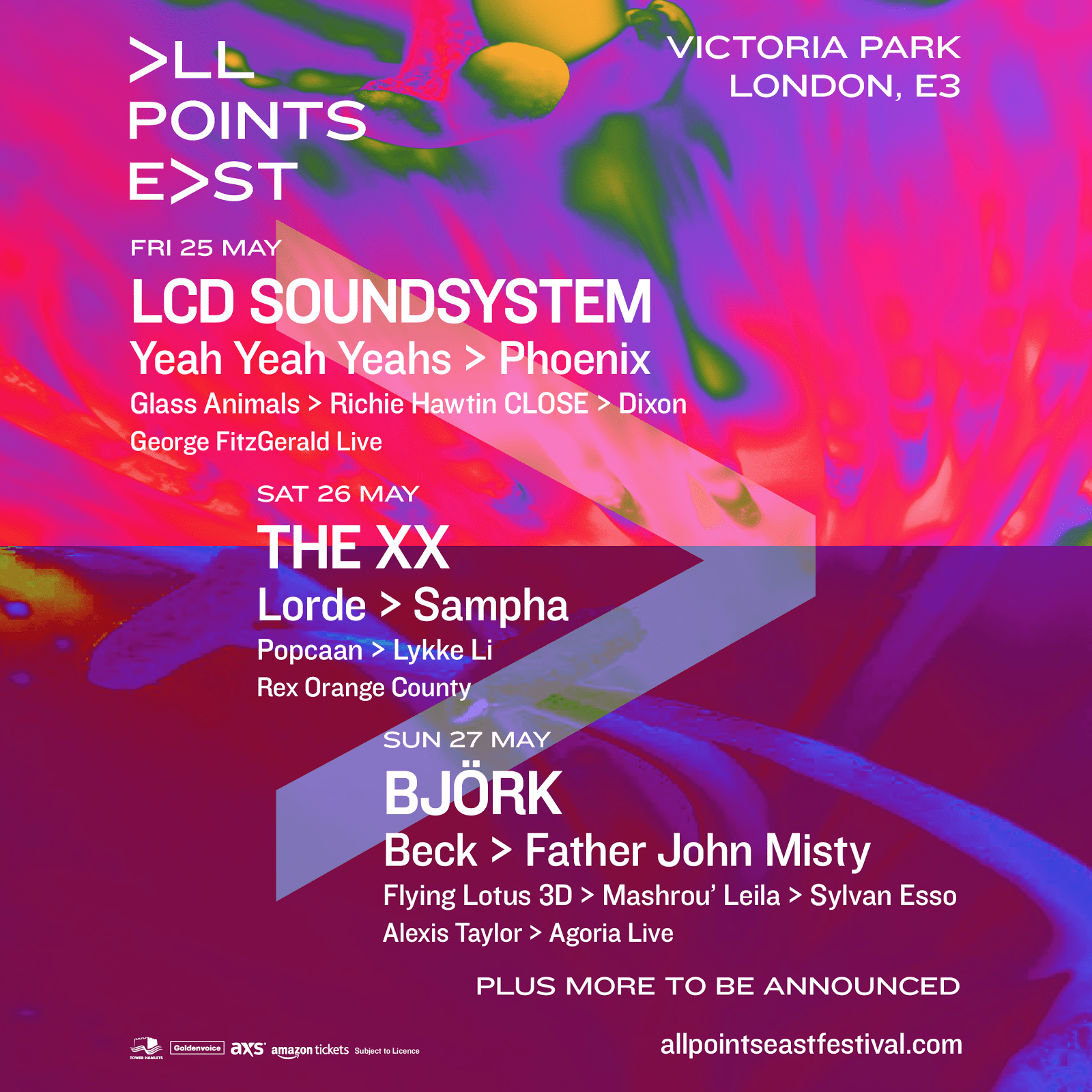 All Points East is a brand new ten day event taking place from 25 May to 3 June 2018 after Tower Hamlets Council last week announced the appointment of AEG to promote the festival in Victoria Park. It is a major part of Tower Hamlets’ bid to be London Borough of Culture (full details of which can be found at www.thbackthebid.co.uk ).

Kicking off on the May bank holiday will be a three day music festival with a thrillingly diverse line up of some of the coolest names in music. Following the opening weekend, a 4-day community focused midweek event will give the park back to the local area with an entertainment programme of comedy, food, outdoor cinema and more to reflect the vibrancy of its surrounding area. The event culminates in three huge APE Presents… headline shows the first of which will be topped by Ohio indie rockers The National.

When James Murphy called time on the first chapter of LCD Soundsystem at the height of their powers, their farewell concert film ‘Shut Up And Play The Hits’ became an iconic document of one of the best live band’s in recent memory. Thankfully this wasn’t the band’s swansong and since reforming for select shows and their enormous, critically acclaimed comeback album ‘American Dream’, they have once again rightfully established themselves as a force to be reckoned with.

Joining LCD Soundsystem on Friday the 25th of May are fellow New Yorkers and indie-rock icons Yeah Yeah Yeahs returning to the UK for a captivating trip through their acclaimed back catalogue, Parisian kings of sultry pop Phoenix, Pineapple-sized genre mixers Glass Animals, electronic pioneer Richie Hawtin bringing his latest live spectacle CLOSE to Victoria Park alongside Berlin club titans Dixon and George Fitzgerald (Live) for a day packed from start to finish with fizzing originality and live moments.

Speaking about their slot, Glass Animals frontman Dave Bayley says:
“It's an honour to be asked to play a night with such stellar headliners! LCD Soundsystem and the Yeah Yeah Yeahs are two of the best live acts in existence. In fact my favourite show of all time was LCD in 2007 at Reading Festival. It’s where I met our drummer Joe. And Karen O is one of the greatest frontpeople of all time, and a hero of mine. We'll have to up our game then we're definitely gonna hang around and have a wild one. After party at my house! Can't wait!”

Minimalist electronic indie trio and album chart toppers The xx headline Saturday the 26th of May, joined by the defining pop sensation that is Lorde, sure to bring an unmissable show that confirms her place as one of the most exciting artists of the modern era. Mercury Prize winner Sampha will be serving up raw cuts and shimmering electronic delights from debut album ‘Process’, while Skepta and Frank Ocean collaborator Rex Orange County opens up his hotly tipped world – appearing on a day boasting already-announced sets from Popcaan and Lykke Li.

A cult legend who has been creating revolutionary music for over four decades, Iceland’s Björk shows no signs of slowing down, with the release of her ninth studio album ‘Utopia’ set for this November. Famed worldwide for her progressive and experimental work, Björk’s music breaks all conventions and boundaries, drawing you in with it’s haunting beauty, raw emotion and striking themes. Her closing headline slot at All Points East is set to be a spellbinding moment in 2018’s musical calendar.

Björk is joined by the master of genre-juggling genius Beck, whose reputation as a live favourite makes him one of the most unmissable performers on the planet. The sardonic wit and impassioned live show of Father John Misty will head to Victoria Park, with wrapping tales from latest album ‘Pure Comedy’ set to go down a storm. One of the true creative enigmas of modern electronic Flying Lotus will bring his 3D show to All Points East, with the thought-provoking and satirical hooks of Lebanese guitar favourites Mashrou’ Leila, the infectious electro-pop of Sylvan Esso, Hot Chip frontman Alexis Taylor and cutting-edge French producer Agoria making up a day full of forward-thinking force.

A truly unique festival environment, an excellence in production, facilities, hospitality and customer service unlike anything seen before in Victoria Park will underpin the entirety of the 10 day event. From the team behind events such as British Summer Time Hyde Park and the world’s number one venue The O2, the highest standards will be stamped across every aspect of the event.

Tower Hamlets Council owns Victoria Park and recently awarded Goldenvoice/AEG Presents the contract to put on events in it. The offer was tendered to promoters with a clear onus to support culture in the Tower Hamlets community; work with residents to reduce any negative impacts of the festivals; and to generate much needed income for public services. For more information visit https://tinyurl.com/backTHbid

Tower Hamlets is bidding to become London Borough of Culture. To back the bid, visit www.thbackthebid.co.uk before 1 December, 2017.
Press Contacts: Email: [email protected] or call 020 7364 4389

About Goldenvoice
Goldenvoice UK promote shows from some of the most exciting acts in the world including The xx, Sampha, Disclosure, FKA Twigs, Florence & The Machine, The Libertines, Alabama Shakes, LCD Soundsystem, Alt-J, Years & Years, Editors, Leftfield, Gorillaz, Drenge, Wolf Alice & many more. From small club shows to sold out arena tours, we are dedicated to nurturing the best emerging talent and delivering the best live experience possible for our artists and for you!