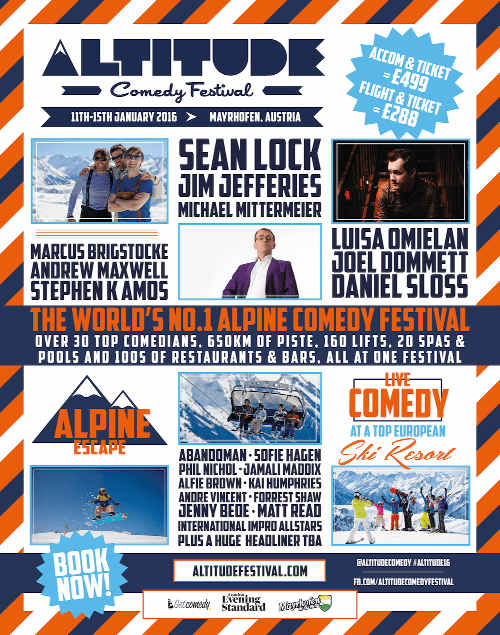 The mountainous joy of Altitude 2016 is going to blow you away with a cavalcade of the world’s greatest comics lined-up, guaranteeing you five days of peak time hilarity! So forget all your troubles, forget all your cares and go clowntown as the Get Comedy crew celebrate a decade of Altitude taking the piste with a gargantuan tenth birthday cast of world renowned jokers and up-and-coming wisecrackers that’s a veritable who’s who of comedy. Don’t miss the chance to grab your tickets now and catch stadium-filling stand-up greats and the next big things, all up close and personal this coming 11-15 January in the breath-taking surrounds of one of Europe’s most beautiful ski resorts, Mayrhofen, Austria.

“I can’t believe we’ve reached our 10th Birthday. It seems like just yesterday myself and Marcus Brigstocke came up with this hare-brained idea and now look at it, one of the best festivals on the planet and quite rightly, the world’s No.1 Alpine comedy festival, drawing some of the biggest comedians in the universe. Bring on the slopes!” – Andrew Maxwell

In honour of 10 unforgettably side-splitting years of hitting the slopes all day and laughing all night at the world’s number one Alpine comedy festival, we’ve got a seriously HUGE HEADLINER to announce in the coming weeks but until then we’re delighted to announce that we’ve finally landed the mighty Jim Jefferies who’ll be searing our schnitzels to perfection in what is destined to be an epically comical corker. Probably the biggest comedian on this planet right now, Jim Jefferies is never afraid to court controversy; currently his ‘US Gun Control’ skit has been seen by over 30million people, and is one of Facebook’s most shared links. With eight sell-out Edinburgh Fringe shows, numerous TV appearances, two HBO, and two Netflix hour comedy specials, and his own sitcom, ‘Legit’, on FX, he’s about as hot as it gets, so don’t miss this incredible chance for some actual in your face comedy superstar action in Mayrhofen!

We’re also very pleased indeed to reveal Sean Lock is back by popular demand this coming January. Sublimely irascible, Sean’s cantankerous clowning has seen him dominating TV schedules in the past 10 years as a team captain on 8 Out Of 10 Cats and Cats Does Countdown, as well as racking up appearances on QI, Have I Got News For You, Big Fat Quiz of the Year, Argumental and many more. A huge hit at last year’s show, we can’t wait for his triumphant return.

But that’s not all for our fun-filled 10th Altitude! Set in a truly stunning ski resort, Mayrhofen boasts excellent restaurants, luxurious hotels, enticing spas and offers access to the entire Zillertal super ski area with 639km of piste and 167 lifts and gondolas, so you can carve up the crust to your heart’s content by day. But by night we’ve got a cornucopia of comedy for you, including Bavarian big shot Michael Mittermeier, who will be performing shows in both English and German, Altitude co-founder, BBC Radio 4 favourite and snowboard demon, Marcus Brigstocke who will be on hand to share his vision of the Brig Society, and Altitude’s architect and promoter, Andrew Maxwell, who will, of course, be donning his trusty lederhosen and unleashing an avalanche of unapologetic amusement.

There will also be tenth birthday high jinks and hilarity from the king of feel-good comedy Stephen K Amos who will be showcasing exactly why he’s the master of crowd interaction, plus we’ll have the slyly seditious Daniel Sloss, Impractical joker and Sky1’s Bring the Noise panellist Joel Dommett, jaw-dropping force of nature Luisa Omielan performing her hit show Am I Right Ladies?, improv rap virtuosos Abandoman and the chance to catch one of comedy’s fastest rising stars; Fosters Edinburgh Comedy Award ‘Best Newcomer 2015’, Sofie Hagen.

Don’t forget, we’ve still got a comedy giant to announce marking 10 amazing years of hitting the slopes and rocking the jokes, guaranteeing Altitude 2016 will be the biggest and best yet. Don’t miss out on early bird tickets, including our exclusive VIP Altitude Ticket, on sale now. Full details can be found at www.ticketline.co.uk

THE VIP WRISTBAND WILL ENTITLE YOU TO:
Entrance to All Altitude Shows
A Free Bottle of Wine (or up to 4 beers) for the Gala Shows*
Reserved Seating**
Meet and Greet the comedians***
Compete in the Clown Hill Race****
Altitude T-Shirt
*Please book this with one of the staff at the Altitude HQ on your arrival ** Gala Shows only. *** VIP’s will be welcome to the Press Launch Monday afternoon **** During the week we will be having the inaugural Comedian Down Hill Race, VIP will be allowed to take part and race the comedians/clowns.