Djs From Mars vs Robotronika feat. Dani Galenda - Always There For You 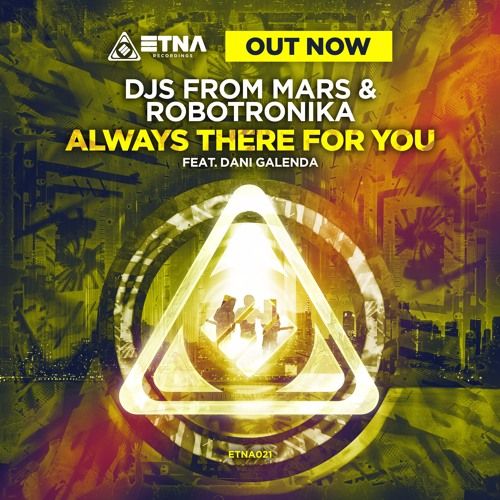 Djs From Mars vs Robotronika feat. Dani Galenda - Always There For You

Electro heroes Djs From Mars team up with the legendary Robotronika. They're hitting the electronic music scene with a commercial club smasher called "Always There For You", with vocals by Italian singer Dani Galenda.

The song has a catchy hook which goes into a melodic but solid drop. So get ready for a new earwig to start into the new year.

Italy based music producers Djs From Mars became indispensable in the electronic music scene over the past years. With more than 70 million views on their YouTube channels, and already within the likes of the biggest names in the scene such as David Guetta, Afrojack, Firebeatz, Ummet Ozcan, VINAI and many more, Djs From Mars continue proving why they're masters of their craft.

Robotronika is one of the most successful LED DJ shows worldwide. With over 500'000 plays on the debut single "We Are Robotronika" and over 200 shows in more than 12 countries, his worldwide success as a producer and a DJ evolves into the top league of electronic music.

Nevertheless, the Italy based producer and DJ Luca Testa (Dim Mak, Panda Funk, Mad Decent) did an amazing edit of "Always There For You".