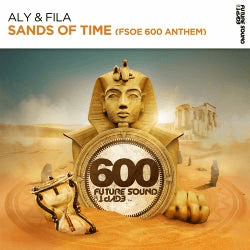 One of the most respected and innovate groups in dance music are back with another new single and this time, they’re not slowing down. Hot off the back of the successes of ‘Come Home’ with Kyau & Albert, the fast-paced, melodic ‘Gravity’ and the searing heater ‘It’s All About The Melody’ that became one of the most in-demand IDs to kick off the year, they now return with ‘Sands Of Time’, their official FSOE 600 anthem.

Hugely euphoric and invoking old school rave nostalgia, Aly & Fila weave through synths that push forth and melodies that envelope, before a female vocal speaks of the ‘Sands Of Time’; it’s both a forward-thinking production and esteemed with its appeal, already receiving rapturous responses at ASOT and Groove Cruise Miami to name but two.

As Future Sound Of Egypt continues to be one of the most listened-to radio shows in trance, the label also continues to deliver to the devotees of the subculture as this becomes their FSOE 600 anthem. As well as this, the Egyptian duo are also gearing up to bring their Future Sound Of Egypt crew to host their very own arena once more at the world’s biggest festival Tomorrowland that last year, saw 400,000 global attendees pass though it’s gates, as ‘Sands Of Time’ is also their 4th release taken from the forthcoming, sixth artist album ‘It’s All  About The Melody’.