Leading electronic music trio Amberoom team up with the renowned Blakkat and LA based vocalist BabyGirl on their debut on Crosstown Rebels with Forces Of Nature. The single features two breakbeat house remixes from Radio Slave and a remix by Lucas Frota & Blakkat.

Amberoom discussed the collaborative nature behind the release, stating: “It’s another collaboration from a group of writers, musicians and producers based in Los Angeles and Essen (Germany), who have worked together for more than a decade. The result is a song about losing yourself in the beauty of love.”

Forces Of Nature leads the way on the A-side, melding ethereal key rolls with warming pads throughout. Lucas Frota and Blakkat’s remix soon arrives, taking on a tribal edge as safari-like drum patterns marry up next to soothing piano chimes. The B-side sets off with the first of Radio Slave’s ‘New Age Of Love’ remixes, a homage to 1990 Breakbeat House that feels perfectly placed for the forthcoming Summer of Love. Part II rounds off proceedings, opting for a breaks-heavy, hip-hop laced bassline and echoing vocal tones.

Amberoom is a project by producers Manuel Tur and Adrian Hoffmann, and DJ veteran Ramin Nouyan. The collective have built up a steady catalogue of original EPs since 2017, releasing on several of the scene’s most well-respected labels in the form of Josh Wink’s Ovum, Dixon and me’s Innervisions as well as Adana Twins’ TAU recordings. Shaboom Records-head Blakkat is well-established in the contemporary electronic music sphere. The LA-based artist has released music on the likes of Josh Wink’s Ovum and Loco Dice’s Desolat and remixed some of popular music’s biggest icons including New Order, Lizzo and A Tribe Called Quest. LA’s BabyGirl is a fast-rising multicultural and multi-talented singer, songwriter, DJ, producer, and founder of music label Zone64. To date, she has recorded with the likes of Blakkat, DJ Larse and Lucas Frota, as well as featuring on DJ Sneak’s remix of Do The Damn Thing by Snoop Dogg, Nipsey Hussle and George Clinton. 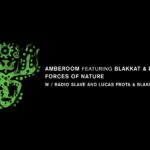