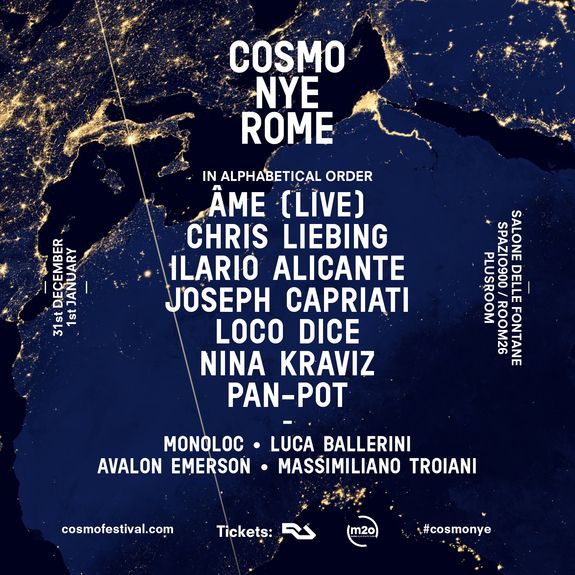 A huge addition to the Cosmo NYE line up is German artist Frank Wiedemann as Âme (Live). Frank's ability to fuse together seemingly disparate influences is underpinned by his incredible talent and live set up. Recently taking the 4th spot in RA's Top 40 Live Acts of 2016, Âme's live set is one of the best in the business. Offering glimpses of the future of electronic music through a unique and meticulously crafted project, Âme's show will be the perfect start to the New Year.

The second female act to grace Cosmo NYE, following the announcement of Nina Kraviz back in October, is the American-born, Berlin-based Avalon Emerson. With a critically acclaimed release on the Whities imprint earlier this year, her schedule has shown no sign of slowing. The crowd can expect a diverse and dreamlike expanse of abstract textures from this talented DJ.

Providing yet more improvised techno to the proceedings is Monoloc (Live), whose raw yet sleek take on live techno has earned him an impressive global following. Having just released his second album 'The Untold Way' on Rødhåd's seminal Dystopian label, and with a release on Tale of Us' Afterlife, Monoloc has had a huge 2016 and is looking to end the year with a bang.

Last but not least is Italian owner of Musical Metaphor, Luca Ballerini. Luca's forthcoming appearance at Cosmo NYE comes off the back of a hugely successful year. A regular at DC-10's legendary Circoloco party in Ibiza among other stand out shows, Luca has truly made his mark on 2016. With larger than life melodies and stadium-sized atmospheres, Luca will be bringing his A-game to Rome at the end of the year.