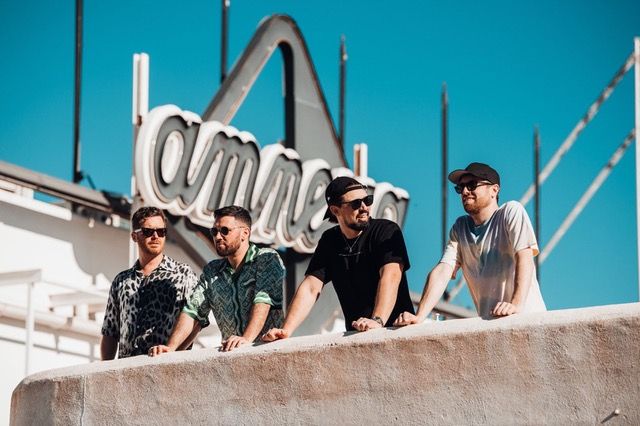 Mondays from June 20th til October 3rd at Amnesia are set to be the talk of the season as Sonny Fodera & Gorgon City will be joined by Danny Howard in The Club each week while international guests like Paul Woolford, Nora En Pure, Dom Dolla, John Summit, Logic1000, Ewan Mcvicar, Lee Foss, DJ EZ, plus many more will all play throughout the summer. Those who buy the Night Tales Roof Garden – Balcony Ticket will get access to the exclusive open air Night Tales roof garden and their signature cocktail menu for a high class night with a difference. Head to amnesia.es now for tickets.

Now that the International Music Summit and the unforgettable opening party has kicked off the season and the party vibes are already in full flow, Amnesia is ready to take up its place at the top of the tree as the most authentic and essential club experience anywhere on the White Isle. Kicking off each week in style, Sonny Fodera and acclaimed duo Gorgon City will host their all encompassing events with a carefully curated selection of exciting guests from across the house spectrum.

This comes after both titanic house acts hosted their sold out London festival together in August last year and spent the last decade defining the house underground with plenty of chart topping hits, world tours, high profile radio support and picking hundreds of millions of streams across YouTube and Spotify. They have a truly global fan base that is all set to descend on Amnesia this summer to hear them play alongside a forward thinking mix of guests including Hot Creations man Lee Foss, melodic selector Nora En Pure, Defected’s latest hero John Summit, garage legend DJ EZ, Moon Harbour’s Miane, plus Biscits, Dom Dolla, Saffron Stone, Space Motion and others.

Meanwhile, every week in the Main Room – which for this year is known as The Club – will be Radio 1 tastemaker and underground influencer Danny Howard. An authority on the culture, the sound and the scene, a decade-long tenure at BBC Radio 1 has positioned him as the tastemaker of a generation. He continues to build on his unique legacy as a musical all-rounder by creating and hosting Vodcast series Planet B, with mentionable guests such as Jax Jones, Heidi, TSHA, Franky Wah, Sub Focus and more.

Danny’s transition from underground champion to fully-fledged star of BBC Radio 1 is credit to his unwavering commitment to musical discovery and a pair of the sharpest A&R ears in the business.

Says Danny Howard of the season, “It’s hard to put into words exactly how excited and proud I am to be part of a brand-new era for Mondays at Amnesia, Ibiza’s original super club!
Like all of us, I’ve sorely missed the summer trips to the White Isle, so to return after so long with a huge residency feels like the perfect way to unleash all of the built up energy and create a party worthy of fulfilling three years worth of raving.

“I’ve been DJing in Ibiza for over a decade now and have been fortunate enough to play at most of the major clubs, but Amnesia is the island’s most authentic venue in terms of what Ibiza represents, and I can’t wait to capture the essence of the true Balearic vibe every single week. Musically (with house music at its core), I’ve had the privilege of inviting some legends of the scene, special guests and the hottest new names in dance to join me every week making up a diverse and exciting line-up that will create something truly special.

“I hold the Main Room (now named The Club) in Amnesia very close to my heart, having spent most of my first ever visit to Ibiza in there, so to be now hosting it blows my mind! Together with Gorgon City and Sonny Fodera hosting the Terrace, we’re ready to bring 16 weeks of pure love and energy under one roof and pay homage to Ibiza’s roots and heritage… See you on the dancefloor!”

For house lovers, Mondays at Amnesia will be pure heaven. For full listings and to get your tickets now, visit: amnesia.es 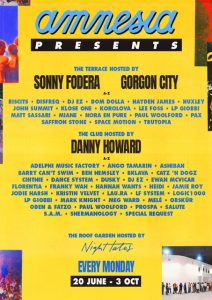 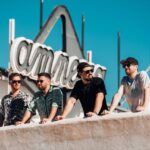