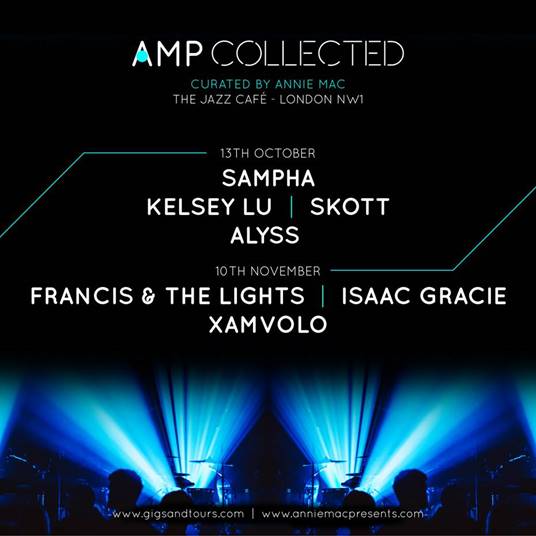 Since the first AMP Collected night in November 2014, this series of live events has become renowned for showcasing the more eclectic side of Annie Mac’s musical taste and championing the freshest in new musical talent, with line-ups including Jorja Smith, Lapsley and Rejjie Snow to name but a few.

This autumn’s AMP Collected will continue to showcase a diverse mix of upcoming artists. The first night on Thursday October 13th will see Kelsey Lu and Skott,Alyss join South London’s Sampha, who will close the night ahead of his already sold out UK tour in November. While the second night on Thursday November 10th will see Francis and the Lights perform an exclusive UK show and feature sets from Isaac Gracie and Xamvolo.

After taking over Radio 1’s flagship primetime weekday evening show in February 2015, Annie Mac has seen her audience grow considerably. Her role as their champion of all genres of new music has further consolidated her position as one of the most powerful influencers and tastemakers in UK music today.

Over and above her career as a broadcaster, Annie’s Annie Mac Presents brand has gone from strength to strength, with the AMP ‘Lost and Found’ Festival in Malta (now in its third year); extensive nationwide tours in both the U.K. and U.S.; and main stage DJ shows at summer festivals such as T In The Park, Creamfields and V Festivals.

Known for her instinct to successfully spot the stars of tomorrow, many artists are on record crediting Annie Mac for their first break, whether that be for a play on her radio 1 show, or for a slot on the bill of one of her critically acclaimed AMP events.

Tickets for AMP Collected nights on 13th October and 10th November are on sale from 9am on Friday 7th October at gigst.rs/AMPC