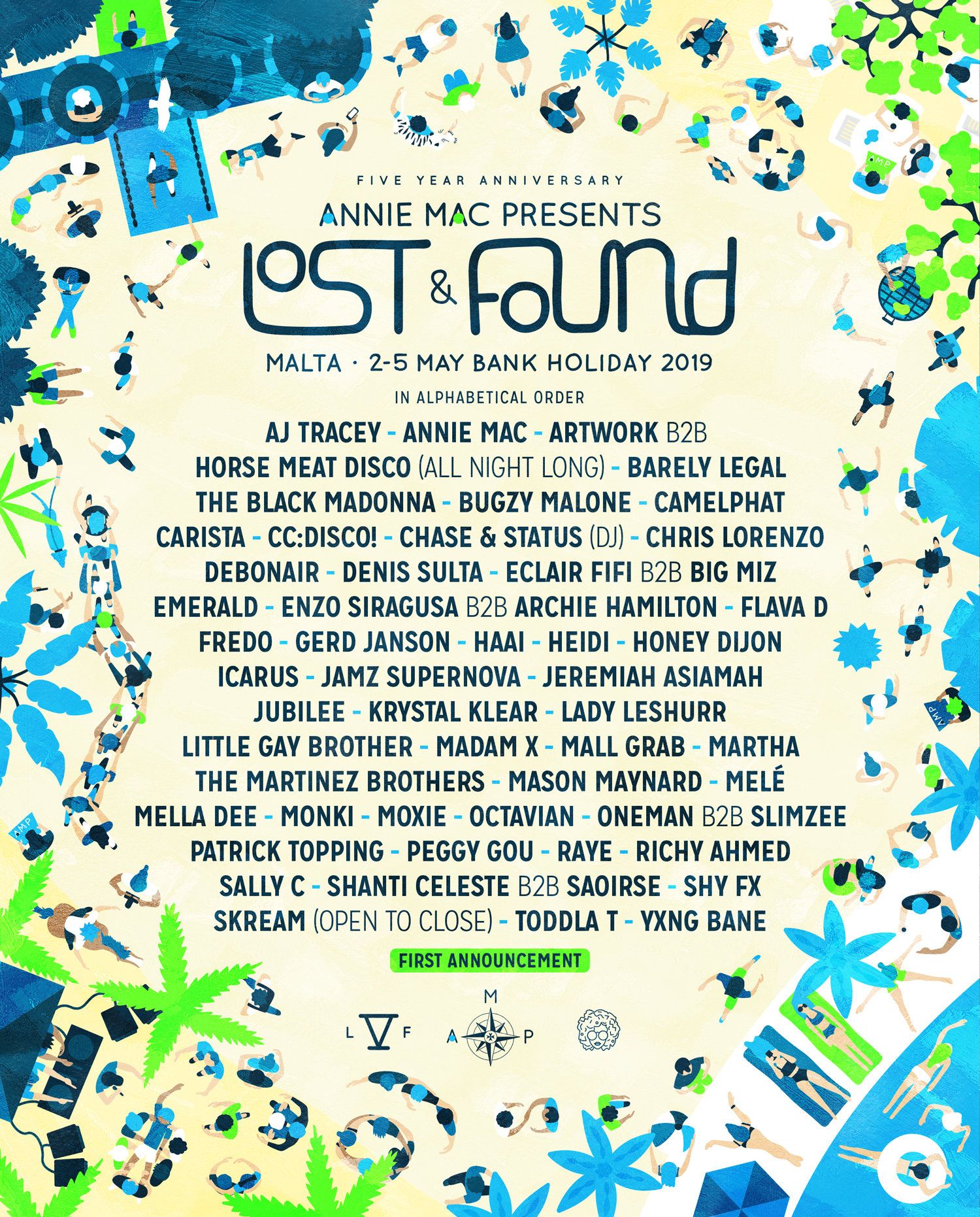 The Black Madonna, Patrick Topping, Peggy Gou, Octavian, Honey Dijon, Fredo, Denis Sulta, Lady Leshurr and Horse Meat Disco are amongst the first acts confirmed to join Annie Mac for her festival in Malta on 2 – 5 May 2019

Malta’s leading music festival AMP Lost & Found has released the first phase of names for its fifth anniversary edition taking place on 2-5th May across the bank holiday weekend. Curated by DJ and Radio 1 tastemaker Annie Mac, the festival will kick start the summer season with four days and four nights of unique parties on the stunning Mediterranean island, with The Black Madonna, Chase & Status, Peggy Gou, Patrick Topping and Octavian amongst those confirmed so far plus a discerning selection of artists across house, techno, bass and grime.

Spread across a range of venues which boasts a one of a kind castle party, as well as beach, pool & boat events and a world-class nighttime site, AMP Lost & Found has paved the way for Malta’s thriving festival and nightlife scene over the last five years. Consistently bringing together both established and hotly-tipped acts, this year’s milestone line-up will be no different and is a direct reflection of Annie’s astuteness as a selector.

Heading up proceedings will be drum'n'bass pioneers Chase & Status who will make their debut in Malta, while crowd favourite Patrick Topping will return as well as underground mainstay The Black Madonna. Givenchy-approved duo The Martinez Brothers join party starters Peggy Gou, Shy FX and Honey Dijon, plus singer songwriter RAYE and a slew of forward-thinking DJ’s that are dominating the underground sound including Eclair Fifi, Shanti Celeste, Saoirse and Madam X.

Crate diggers Skream, CC:DISCO! and Amsterdam’s Carista will be present, while the festival’s rap and bass leaning offering will be represented by the likes of Octavian, Bugzy Malone, Fredo, Lady Leshurr, AJ Tracey, Yxng Bane, Toddla T and Flava D. Rounding off the first phase announcement is a number of much-loved acts from the festival family such as Denis Sulta, Mall Grab, Heidi, Artwork and Mella Dee who are each responsible for some of AMP Lost & Found’s most unforgettable moments.

“It’s been four years of this wonderful adventure that we call Lost & Found. We have made so many friends along the way and experienced some unforgettable music memories. It’s been such a dream to bring so many young, brilliant people to discover Malta and its welcoming culture. We are so chuffed that we have made it to five and we are going to celebrate in a big way this year with a huge, diverse line-up to represent the amazing people that come to Lost & Found every year. Cannot wait already.”

Now a solid fixture in the European festival calendar, AMP Lost & Found serves as an ideal choice for music fans seeking sun, sea and affordability. The festival has once again teamed up with Choice Holidays to offer a range of travel and accommodation packages to suit all budgets, with hotel options currently available for a deposit of just £1. A range of extras including airport transfers and festival shuttles are also available, with tickets for the optional castle, beach & boat parties accessible via the festival’s website.