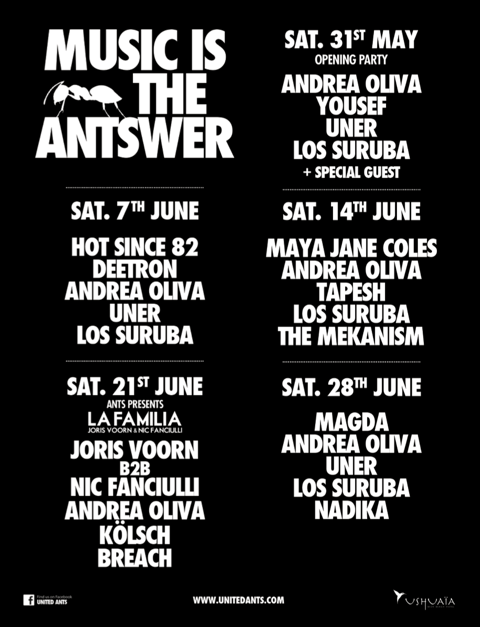 Ushuaïa Ibiza’s leading house & techno residency ANTS has confirmed its return the white isle on 31st of May. Heading back to where it all began for another summer of forward-thinking parties, ANTS will bring deep underground vibes to Ushuaïa Ibiza’s beautifully lux surroundings every Saturday throughout the summer until 27th September.

After last September’s spectacular closing party the ANTS have been hard at work, touring the world with a series of ANTS takeovers including swarming Miami’s SLS Hotel during the Winter Music Conference, taking the reins at Sankeys Manchester and invading resident Andrea Oliva’s hometown for a special one off show at Nordstern, Basel.

But now it’s time to return home and get ready to welcome in a new season of ground breaking parties pushing the boundaries even further than last year while continuing to fuse the very best in underground house and techno with the kind of production and vibe that is seen nowhere else on the island.

The team behind last season’s biggest success story are proud to announce they will be throwing open the Colony’s doors at the new weekly opening time of 3pm on Saturday 31st May and every week there after with a solid line up comprising resident DJs and very special guests. Returning as Colony resident this year is ANTS frontman and innovative breakthrough artist Andrea Oliva who after taking the world by storm with a string of releases and massive ANTS parties is all set to return to his position as Colony leader every Saturday throughout the summer, the mighty UNER also returns to Ushuaïa Ibiza having been on a super successful tour and releasing a myriad of fresh tracks in the way of new LP ‘Tune 432’. Breakthrough duo Los Suruba also confirm they will be in attendance throughout whilst a plethora of the underground scene’s brightest stars are confirmed to make an appearances on the poolside stage for the both opening fiesta and the rest of the season.

As well as welcoming the return of the now legendary residents, ANTS is excited to welcome La Familia, a brand new party from master of groove Joris Voorn and international house figurehead Nic Fanciulli. A brand new concept to grace the White isle, Joris and Nic will be playing back to back alongside friends and contemporaries across four exclusive takeovers at ANTS. Launching on 21st June La Familia will be exclusively presented by ANTS for four dates over the summer, with a further four standalone dates in September at Ushuaïa to be announced shortly.

The Colony is very proud to announce a new legion of workers who will be making monthly appearances at the super club, headed up by Swiss house and techno pioneer and no stranger to the ANTS stage, Deetron, plus Tapesh will also be joining the ranks. Having laid releases on some of dance music’s hottest labels over the past few years including Mobilee, Hot Flush and Defected, Tapesh is the perfect candidate to lead the Colony forward on its mission to bring a taste of the underground to Ushuaïa Ibiza. The Mekanism will be rounding off the monthly residents bill, bringing his fresh Parisian take on underground beats to the mix.

Other guests confirmed to join the Colony this year include Maya Jane Coles, Hot Since 82, Kolsch and Breach, as well as surprise unannounced guests lined up for appearances at ANTS parties throughout the season, so be ready to expect the unexpected.

New for 2014, Ushuaïa Ibiza are proud to introduce a whole new dimension to the party with ‘The Cloud’ a raised platform equipped with views of the ANTS DJ booth and the rest of the party rumbling on below.

Those returning to ANTS after last year’s amazingly successful debut season can expect even bigger and better production and a world of new surprises currently hidden up the ANTS black morph suit sleeves! Returning workers, a crucial element to the ANTS concept, can look forward to more storming, swarming and take overs of the Island’s most iconic locations at any moment.