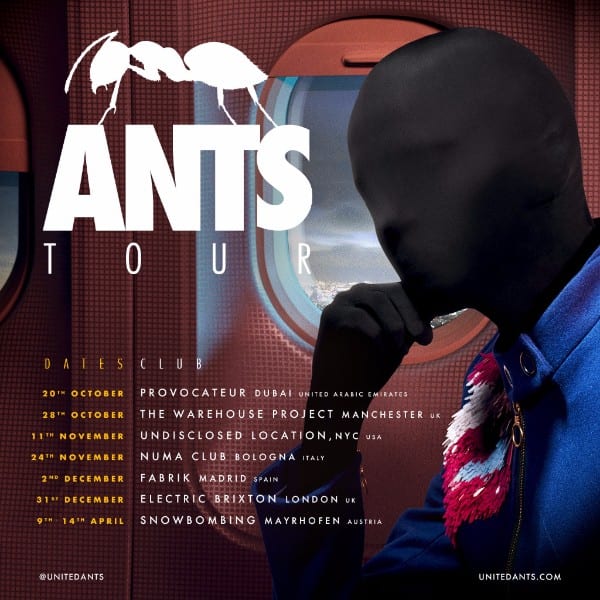 The Ibiza colony reveal 7 shows from Europe, USA and UAE this winter.

After a mammoth summer that saw ANTS celebrate five years as Saturday residents at the renowned open-air venue of Ushuaia, the colony have announced plans to spread their musical prowess further with another global winter tour.

With seven unmissable shows lined up so far across Europe, America and the UAE, the infamous house and techno party will debut in Dubai’s nightlife oasis, Provocateur, followed by a spellbinding Halloween takeover in collaboration with the legendary UK promoters The Warehouse Project in Manchester. Keeping hearts beating and the dancefloor moving, ANTS will then head to New York for their very first US club show at a location still to be revealed, shortly followed by a taste of the european sun in Italy and Spain at Numa Club and Fabrik. New Years Eve will be a landmark show for the ANTS team as they host their first ever NYE spectacle at London’s striking auditorium Electric Brixton. Wrapping up the almighty tour they will then return to the Austrian mountains for Snowbombing 2018.

Bringing a taste of Ibiza to the tour, loyal colony members Andrea Oliva, Maya Jane Coles, and UNERare confirmed to feature at various dates, alongside the likes of dynamic duos Eli & Fur, Groove Armada and Solardo. An array of pioneering music selectors such as Paul Kalkbrenner, Richy Ahmed, wAFFand Jesse Rose are also locked, maintaining momentum for what has been a standout year for ANTS.

Looking ahead for 2018, the ANTS army is set to invade South America at the beginning of the year, so keep your eyes peeled as seriously exciting news will be heading your way.