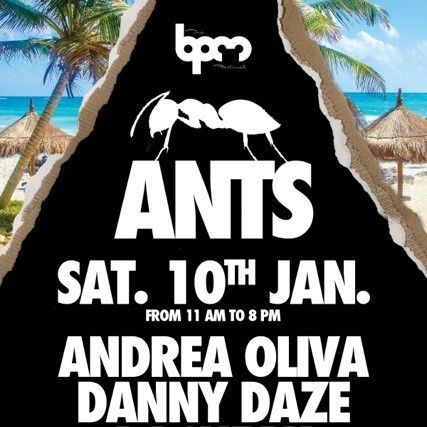 After another unforgettable summer season of weekly parties at Ushuaïa Ibiza and a series of worldwide events that cemented ANTS reputation as a premier international party, The Colony continues its world domination by heading to Mexico’s BPM festival with a line up of the world’s foremost house and techno artists in tow.

Armed and ready to bring their deep underground vibes and next level production to Playa del Carmen’s prime party venue – Blue Parrot – The Colony has announced plans to swarm the beachfront club during the opening weekend of the festival for a day time party reminiscent of their now well established Ibiza events.

Heading up the bill is an artist that needs little introduction; having been an ANTS resident since its inception in 2013 Andrea Oliva has become relied upon to bring his underground flair to every ANTS party.

The Original House Gangster, DJ Sneak also returns to The Colony for this very special event bringing with him the upfront sounds of underground house and techno he has become known for the world over.

Ibizan duo Los Suruba will also be making the journey across the Atlantic to join The Colony in Mexico after becoming a staple act at the summer events and seeing in the New Year during The Colony’s Roman NYE invasion.

Last but by no means least – UNER will also be in attendance to keep The Colony vibe alive through the day with another bass heavy blend of house and techno productions set to bring the Mexican crowd fully up to speed with the ANTS party ethos.