Apashe Shares Documentary on the Making of New ‘Renaissance’ LP

Apashe Shares Documentary on the Making of New ‘Renaissance’ LP

Returning to the scene just several weeks after releasing his groundbreaking ‘Renaissance’ LP, Apashe is back with an in-depth documentary that takes a deep dive into the creation of his highly-successful third studio album.

The Canadian-based producer is joined by fellow Montréaler and longtime photographer/videographer Adrian Villagomez. The almost seven-minute long video captures the true grit, dedication, and hard work that was put into the making of ‘Renaissance’. Flawlessly showcasing Apashe’s fusion of classical with bass music, the documentary also highlights the challenges that were faced when breaking this new sonic ground.

The creative duo traversed the globe to make the full-length LP, having impressively recorded a 69-piece orchestra in the Czech Republic, music videos in both Japan and Russia, as well as additional content in Canada. 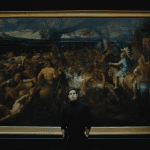